Ever since the shooting of Kasautii Zindagii Kay 2 began post COVID-19 lockdown, there has been one or the other obstruction coming in the line. The recent one that came to light was the quitting of the lead actor Parth Samthaan. Soon another shocking news came when sources claimed that the leading lady of the show Erica Fernandes also has plans to quit Ekta Kapoor's daily soap. Ever since there has been a discussion amongst the fans related to the actors who would replace them as Anurag and Prerna. Recently, rumours started doing the rounds that Divyanka Tripathi Dahiya will replace Erica in the show. However, the actress who has worked in Yeh Hai Mohabbatein squashed all the speculations and called it a mere rumor and nothing else.

Taking to the Instagram story, Divyanka shared a post that read, "DTD as Prerna in KZK? IT’S A RUMOUR! (Just clearing the air for those who care)." Have a look at the same here: 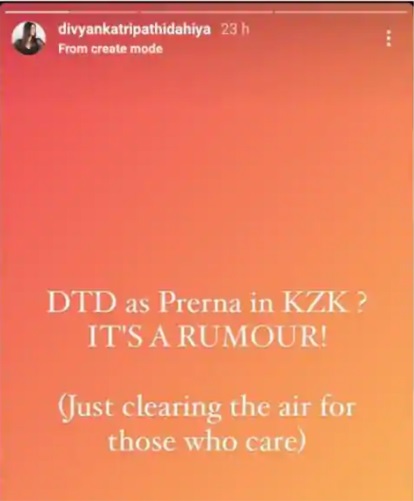 A post shared by Divyanka Tripathi Dahiya (@divyankatripathidahiya) on Aug 11, 2020 at 7:34am PDT

Not just Parth and Erica, even actor Sahil Anand who plays the character of ‘Anupam Sengupta’ has bid goodbye to the show. Parth has already given his notice period and will shoot till September 10 or 11th. According to the sources, Parth took this decision of quitting the show because of the shift in focus in the storyline on Prerna and Mr Bajaj, played by Karan Patel. Parth has got a bigger project and with the entry of Karan Patel in the show, his plot has been sidelined.

ALSO READ: Karan Singh Grover aka former Mr Bajaj opens on quitting Kasautii Zindagii Kay 2: It was not my decision

Back to Shoot after 3 months 😇 Back to normalcy ! #unlockindia

Earlier, the story revolved around Anurag and Prerna but now it has been focusing on Mr Bajaj and Prerna, which has left him insecure. Also, Parth is not ready to play the role of a father of a 10-year-old in the show. His salary is also one of the reasons for his decision. Meanwhile, Erica is leaving the show for better prospects.

For the unversed, Kasautii Zindagii Kay 2 started with Parth Samthaan, Erica Fernandes, Hina Khan and Karan Singh Grover. Through the past year, the show witnessed many replacements. Actress Hina Khan quit the show and Kahin Toh Hoga fame Aamna Shariff was brought on board as the new Komolika. Then, Karan Singh Grover also left and Karan Patel came on board as his replacement.