The canine, a four-year veteran of the Special Operations Command (SOCOM) Canine Programme, has been a member of approximately 50 combat missions and was injured during the raid at the hideout of Baghdadi in northwestern Syria.

The specially trained 'US hero dog' that helped American commandoes in killing ISIS chief Abu Bakr-al Baghdadi met US President Donald Trump on Monday, where the president publicly introduced Conan, the specially trained dog. The dog was brought to visit the White House and met President Trump in his Oval Office. It later appeared before the White House press corps in the Rose Garden along with Trump, the First Lady Melania and Vice President Mike Pence.

Trump also met with Special Forces involved in the attack in Northern Syria that resulted in the death of Baghdadi. The commandoes did not come out in the public.

"Al Baghdadi is gone, but it was a flawless attack," Trump told reporters.

The US President also posted a video of him with the US military dog.

Conan, a Belgian Malinois, seemed much more interested in the head scratches it was getting from Mike Pence, repeatedly looking up at the vice president in search of more attention. 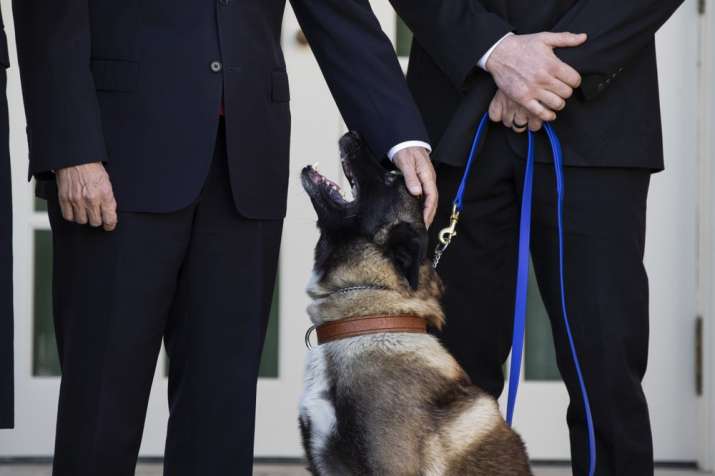 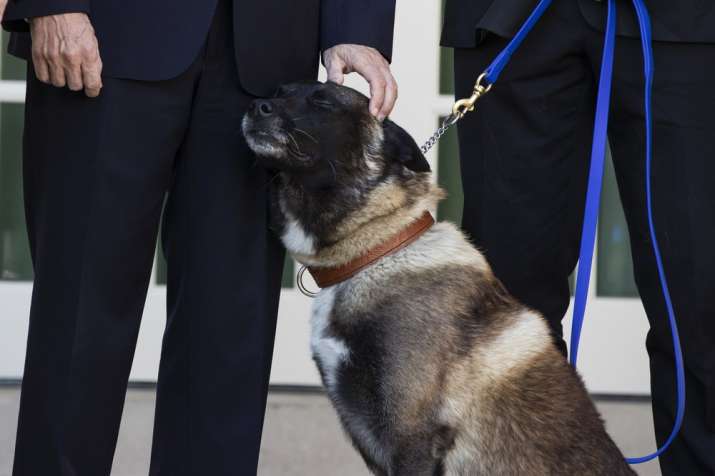 Trump used a slew of adjectives to describe Conan, which was injured when it was exposed to electric wires in the late October raid while chasing al-Baghdadi at the terrorist’s compound in northwest Syria. “Incredible.” “Brilliant.” “Smart.” “Ultimate fighter.” “Very special.” “Tough cookie.”

Trump said he met with the soldiers and had given Conan an award. He said, "The “dog is incredible”.

"So brilliant and so smart," Trump said.

He said both the soldiers and Conan did a “fantastic job”.

In his remarks, Trump repeatedly praised Conan’s performance and described his breed as the “ultimate” at fighting and drug-sniffing.

He did not directly answer a question about whether he would adopt Conan, but he said that the dog would not be retiring and had more time to serve.

According to a White House official, Conan was not accompanied by his normal handler for this appearance since the handler participated in the Baghdadi raid and cannot appear publicly.

Conan appeared to be very calm and composed, during his Rose Garden appearance.

The canine, a four-year veteran of the Special Operations Command (SOCOM) Canine Programme, has been a member of approximately 50 combat missions and was injured during the raid at the hideout of Baghdadi in northwestern Syria.

Baghdadi, 48, died in October after the world's most wanted terrorist was chased by the US special forces along with military working dogs.

He blew up his suicide vest following the US raid on his compound in Syria's Idlib province.