The government on Wednesday appointed M Nageshwar Rao as interim Central Bureau of Investigation (CBI) director with immediate effect, reported news agency ANI. Meanwhile, Director Alok Verma and Special Director Rakesh Asthana were sent on leave. The developments have come at a time when there is an internal war going on within the agency.

CBI vs CBI: Relief for Rakesh Asthana as Delhi HC prevents his arrest till October 29

CBI Vs CBI: Here's what happened throughout the day

15:25 pm: CBI Director Alok Verma did not cooperate with CVC in probe against him, says a statement released by the Government

15:12 pm: Despite repeated assurances and reminders, the Director, CBI failed to furnish the records before Commission. CVC has observed that Director, CBI has not been cooperating in making available records sought by the Commission relating to serious allegations: Information and Broadcasting Ministry

15:06 pm: Various opportunities have been given to produce such records and after several adjournments, though CBI assured the Commission on September 24, 2018 to furnish the records within three weeks: Information and Broadcasting Ministry

15:05 pm: CVC on receipt of a complaint on August 24,2018 containing various allegations against senior functionaries of CBI has served 3 separate notices(under section 11 of CVC Act, 2003)on Sept 11 upon Director,CBI to produce files and documents before Commission on September 14: Information and Broadcasting Ministry

14:07 pm: CBI chief Alok Verma was removed because he was probing Rafale case. PM's message is clear, if anyone will work on Rafale, he will be removed, decimated. The country and the constitution are in danger: Tweeted Rahul Gandhi

12:49 pm: The CVC's recommendation and the government's action is intended to restore the institutional integrity and credibility of CBI: FM Arun Jaitley

12:47 pm: "CVC in its yesterday's meeting said neither these 2 officers (Arun Verma & Rakesh Asthana) nor any agency under their supervision can investigate charges against them. So the officers will sit out by going on leave. It's an interim measure," says Arun Jaitley.

12:36 pm: To maintain the institutional integrity of CBI and in the interest of fairness, purely as an interim measure,they will sit out by going on leave. An SIT not functioning under either of these officers will investigate. This is in  accordance with highest standards of fairness: FM

12:35 pm: CBI is a premier investigative agency, for maintenance of its institutional  integrity, it is a pre condition and absolutely essential for fair investigation: FM Arun Jaitley

12:26 pm: CVC has the power to investigate the CBI bribery matter: Arun Jaitley

12:18 pm: Is there a co-relation between Rafale deal and removal of Alok Verma? Was Alok Verma about to start investigations into Rafale, which could become problem for Modi ji?: Questioned Arvind Kejriwal

12:02 pm: We don't know if CBI was investigating other issues like Rafale scam. If that was the case, it was ordered to protect the govt, PM & concerned officers. Why was the DIG investigating the charges against Asthana has been sent to 'Kala Pani' in Andaman?: Sitaram Yechury, CPI(M)

11:50 am: I maintain that the integrity of the institution (CBI) is the most important. In an extraordinary situation, the government has full authority to act. At this time, an open fight between the top two people spells doomsday for the institution: Vikas Singh, former ASG

11:32 am: CBI's JD (P)Arun Kumar Sharma, A Sai Manohar, HoZ V Murugesan and DIG Amit Kumar have been transferred/posted. They were a part of the team probing the case against CBI's Rakesh Asthana

10:42 am: Alok Verma​ has reached SC. His lawyer appealed for early hearing in the case. Apex court will hear the matter on Friday.

10:38 am: CBI staff is not allowed to enter the office premises before 12 pm

10:21 am: Alok Verma may knock the doors of Supreme Court today against the Centre's order of sending him on leave

10:05 am: After a letter from CVC, raids took place at the CBI HQ: Sources

09:59 am: There will be no movement of officials or files at CBI Director's office and CBI Special Director Rakesh Asthana's office till 2 pm today: CBI sources

09:32 am: What are the reasons for sending CBI director on leave? Under which law did the Modi govt get the authority to initiate action against the chief of an investigating agency appointed as per the Lokpal Act ? What is Modi govt trying to hide?: Questioned Arvind Kejriwal

09:05 am: Offices of Alok Verma and Rakesh Asthana are also being searched

09:00 am: Raids are taking place at the office of DSP Devender Kumar

08:30 am: Director Alok Verma and Special Director Rakesh Asthana were sent on leave 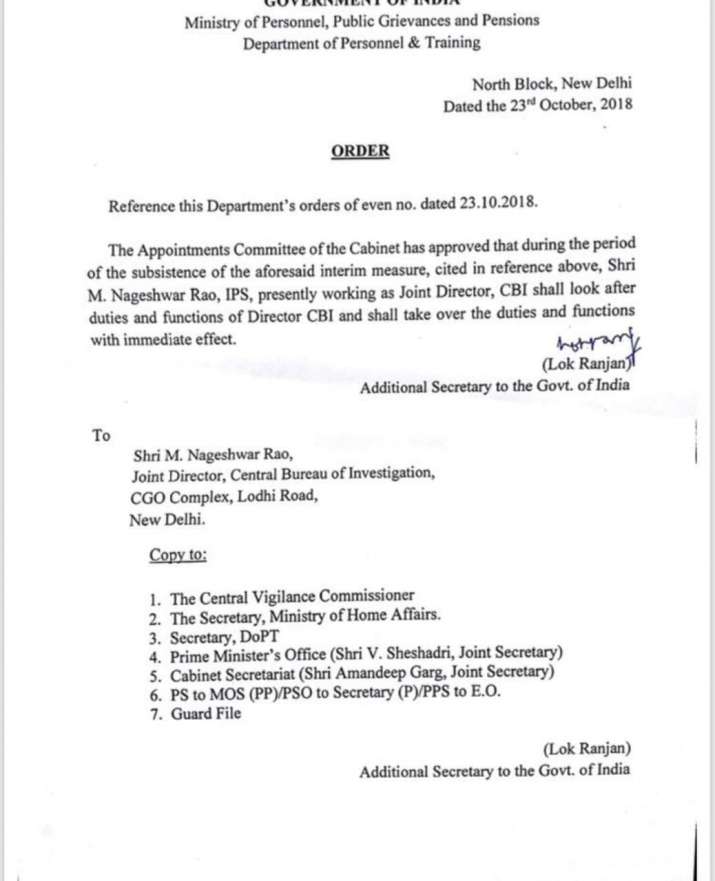 Meanwhile. the Delhi High Court, on Tuesday, ordered that no action can be taken against Special Director of the CBI Rakesh Asthana till October 29, the next date of hearing. However, the court clarified that there is no stay on the probe considering the nature and gravity of the case.

Asthana has challenged the FIR lodged against him on bribery allegations. Besides him, the agency's Deputy Superintendent of Police Devender Kumar, who was arrested by the CBI on Monday, has also filed a separate petition seeking quashing of the FIR.

The order asking the agency to maintain the status quo, till October 29, has been issued on the plea of Asthana only.

​Asthana, a 1984 batch Indian Police Service officer of Gujarat cadre, is accused of accepting a bribe of Rs 2 crore from a Hyderabad-based businessman Sathish Babu Sana who was under probe in the Qureshi case in order to "wreck" the investigation. The case was being examined by a special investigation team (SIT) headed by Asthana.

Here are latest updates in the case: