Amitabh Bachchan penned down a note on Friday asking to 'bring back hand writing'. While fans were thinking about Big B's thoughtful post, actor Kartik Aaryan dropped a hilarious comment and changed the game.

Bollywood megastar Amitabh Bachchan penned down a note on Friday asking to 'bring back hand writing'. This is no secret that Big B loves to write and he often sends out his hand written appreciated note to the actors whose performance he loves. On Friday night, he shared a note that read, "When we write a litter of the alphabet we form in component stroke by component stroke and that process of production involves pathways in the brain that go near or through parts that manage emotion." He further added, "writing by hand promotes learning and cognitive development in ways keyboard writing can't match. Bring back handwriting, its good for your brain"

“Bring back hand writing: its good for the Brain” ~ h 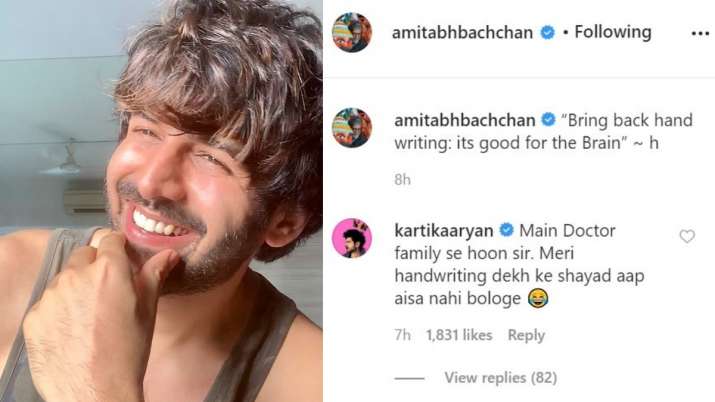 Interestingly, Kartik's family plays a big role in making his online persona even more interesting as they keep making cameos in his posts. During the release of Amitabh Bachchan's Gulabo Sitabo in June on Amazon Prime, the actor had the most amazing way to accept the tongue twister challenge by the superstar. He was brutally trolled by his mother and sister Kritika. Kartik shared a post that showed him trying to make a video when his mother interrupted, 'kya kar raha hai." The moment he told her that Big B has tagged him for this challenge, she trolled him saying, "Amitabh Bachchan ne tag kiya hai? Unke itne bure din aa gaye hai?"

On the professional front, superstar Amitabh Bachchan will be seen in Rumi Jaffery's Chehre, Ayan Mukerji's Brahmastra also starring Ranbir Kapoor and Alia Bhatt, and Nagraj Manjule's Jhund. Reports state that Jhund will have a direct OTT release on Netflix.

On the other hand, Kartik Aaryan has many interesting movies lined up for release. He will be seen in Karan Johar's Dostana 2 with Janhvi Kapoor and in Anees Bazmi's Bhool Bhulaiya 2 with Kiara Advani and Tabu.