The third and the largest phase covered as many as 116 constituencies amid complaints of EVM malfunctioning in many states and killing of a man outside a booth in West Bengal.

India TV Sports Desk
New Delhi Updated on: April 24, 2019 0:02 IST
A voter turnout of 66 per cent was recorded in third phase of Lok Sabha Election 2019 on Tuesday, including over 80 per cent in Assam. The third and the largest phase covered as many as 116 constituencies amid complaints of EVM malfunctioning in many states and killing of a man outside a booth in West Bengal.
Election Commission officials in Delhi put the voting percentage at 65.61 at 8 pm. Final figures are likely to change as queues of voters were seen at several centres even after the scheduled time for voting ended.
Polling was also held in Anantnag seat in Jammu and Kashmir which saw a turnout of 13.61 per cent. Elections for this seat are being conducted in three phases.
The driver of a vehicle carrying ITBP troops back from their poll duty in Kokarnag area of south Kashmir was killed as it overturned after a mob hurled stones at it, officials said.
With Tuesday's polling, voting has been held in 302 Lok Sabha constituencies apart from Anantnag.
In Gujarat, a turnout of 63.67 per cent was registered for the 26 seats.
Key political leaders, including Prime Minister Narendra Modi, BJP president Amit Shah, party veteran L K Advani, Union Finance Minister Arun Jaitley and Congress leader Ahmed Patel cast their votes at different places in the state. Shah is contesting from Gandhinagar seat.

The polling percentage was 71.67 in Kerala from where Congress chief Rahul Gandhi, party MP Shashi Tharoor and Union minister K Alphons are among those who are trying their luck.
In Karnataka, 67.56 per cent voters cast their votes in the 14 Lok Sabha constituencies with the Congress-JD(S) alliance and the BJP locked in a fierce contest.
An estimated 61.35 per cent of voters exercised their franchise in the 10 Lok Sabha seats of Uttar Pradesh amid reports EVM snags at some booths. 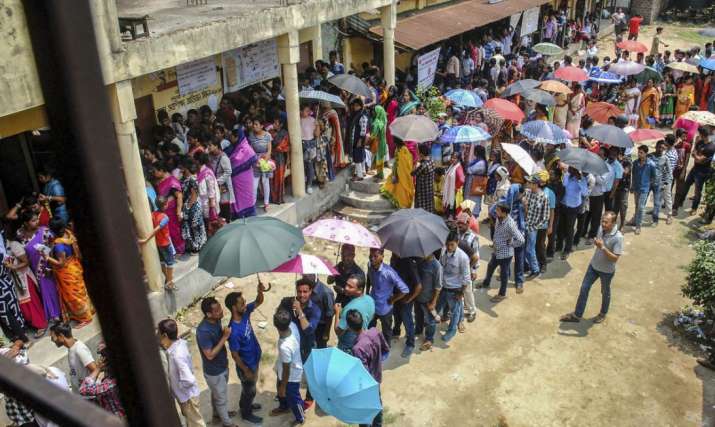 Prominent leaders in the fray in this phase are four members of SP patron Mulayam Singh Yadav's clan including him besides senior party leader Azam Khan and actor and BJP candidate Jaya Prada. Mulayam's brother Shivpal Yadav and nephews Dharmendra Yadav and Akshay Yadav are also contesting.
There were complaints of EVM malfunctioning at some booths and were attended to, Chief Electoral Officer L Venkateshwar Lu said in Lucknow.
The Samajwadi Party lodged a complaint over the alleged malfunctioning of EVMs with the Election Commission, terming it criminal negligence.
At a booth in Etah, the presiding officer was removed after people accused him of forcing them to cast their votes in favour of the SP.
SP leader Ahmed Nafis was taken into custody for some hours in Kasganj in Etah after authorities anticipated breach of peace.
SP MP Dharmendra Yadav, who is seeking re-election from Badaun, lodged a complaint against state minister Swami Prasad Maurya, claiming he was campaigning in the constituency for his daughter and BJP candidate Sanghmitra Maurya.
A turnout of 58.98 was recorded in 14 Lok Sabha constituencies in Maharashtra. State BJP president Raosaheb Danve (Jalna) and NCP chief Sharad Pawar's daughter Supriya Sule (Baramati) are among the prominent candidates in the fray.
The two Lok Sabha seats in neighbouring Goa registered an average 73.23 per cent voting.
Chhattisgarh saw a turnout of 64.68 per cent.
In West Bengal, a group of men attacked 52-year-old Tiyarul Sheikh with sharp weapons following an altercation when he went to vote at a booth in Baligram Primary School under Bhagwangola police station limits in Murshidabad Lok Sabha constituency, police sources said.
Congress candidate of Murshidabad Lok Sabha seat Abu Hena claimed Tiyarul was a party worker and was killed by TMC cadres.
The Election Commission sought a report from the Murshidabad district magistrate.
According to the latest data available from the Election Commission, an estimated 60.44 per cent polling was recorded in Odisha, 79.67 per cent in West Bengal, 80.73 per cent in Assam, 59.97 per cent in Bihar and 79.57 per cent in Tripura.

Voting was also held in in 42 assembly constituencies in Odisha.
In the third phase of the general elections, polling is being held in six Lok Sabha seats in Odisha, four in Assam, five seats each in Bihar and West Bengal and a lone constituency in Tripura.
Polling process was briefly hampered with reports of EVM malfunctioning in some states, and the arrest of two polling agents of the ruling BJP in Tripura, an election official said.
Bombs were reportedly hurled outside a booth in Balurghat seat of West Bengal, leading to commotion, he said, adding, central forces also allegedly baton charged a mob in Suti area of Jangipur.
Among the prominent candidates in the fray in Odisha are BJP national spokesperson Sambit Patra and Odisha Congress chief Niranjan Patnaik, while in Bihar, Loktantrik Janata Dal chief Sharad Yadav and state minister Dinesh Chandra Yadav are contesting the polls.
The electoral battle in West Bengal for the third phase features sitting MPs and TMC candidates - Arpita Ghosh from Balurghat and Mausam Benazir Noor from Maldaha Uttar - Congress leader Pranab Mukherjee's son Abhijit from Jangipur and BJP's Humayun Kabir.
In Assam, noteworthy among those in the fray are sitting MPs AIUDF chief Badruddin Ajmal in Dhubri and Independent Naba Sarania in Kokrajhar; BPF candidate and state social welfare minister Pramila Rani from Kokrajhar and Congress MLA Abdul Khaleque from Barpeta.
Voting was also held in one seat each in Dadra and Nagar Haveli and Daman and Diu.
Polling in remaining phases will take place on April 29, May 6, May 12 and May 19, and counting will be on May 23.