BJP, TMC lash out at each other as violence erupts during Amit Shah's roadshow in Kolkata

News agency ANI reported that sticks were hurled at BJP president Amit Shah's truck during Kolkata roadshow. Police had to resort to lathi-charge to prevent the situation from going out-of-control.

Violence hit BJP president Amit Shah's roadshow in Kolkata on Tuesday. While Shah targetted West Bengal Chief Minister Mamata Banerjee over the violence, Mamata claimed that people were brought from outside West Bengal to carry out violent activities on Tuesday.

Mamata Banerjee has refuted these allegations and has said that violence was not fomented by Trinamool Congress.

#WATCH Clashes broke out in roadshow of BJP President Amit Shah in Kolkata after sticks were hurled at Shah’s truck. #WestBengal pic.twitter.com/t8bnf31vGA

A number of people have got injured.

Here is how the situation unfolded:

10:29 pm: BJP will hold a demonstration at Jantar Mantar in New Delhi to protest against violence at Kolkata. The demonstration will be held on Wednesday at 11 am

West Bengal Chief MInister Mamata Banerjee has refuted allegations of TMC workers being involved in violence during Amit Shah's rally this evening. She said that TMC cadres were not involved in incidents of stone pelting that occurred this evening.

10:05 pm: This is  state-sponsored violence, we demand President's rule in WB: Yogi Adityanath

Uttar Pradesh CM Yogi Adityanath alleged that violence in Kolkata was state sponsored. He has now demanded a President's rule in West Bengal.

10:02 pm: "Is Amit Shah above God that none can protest against  him?" says West Bengal CM Mamata Banerjee over clashes during his road show.

9:50 pm: BJP delegation arrived at Election Commission office in New Delhi to lodge a complaint about what happened in Kolkata this evening. The delegation includes Nirmala Sitharaman, Mukhtar Abbas Naqvi, GVL Narsimha Rao and others.

9:10 pm: West Bengal is being run by a 'government of gangsters': Arun Jaitley on Kolkata violence.

8:40 pm: TMC was frustrated because of the large turnout at BJP roadshow, that's why they attacked it: Amit Shah

8:30 pm: The attack at the rally in Kolkata was a conspiracy by Mamata Banerjee, says Amit Shah.

8:10 pm: Union Minister Babul Supriyo has alleged that an attack on Amit Shah's roadshow was launched from inside Calcutta University.

7:48 pm: "TMC is scared, hence it is resorting to such acts," BJP leader Shivraj Singh Chauhan

7:46 pm: News emerges that statue of Ishwar Chandra Vidyasagar was vandalised during the violence 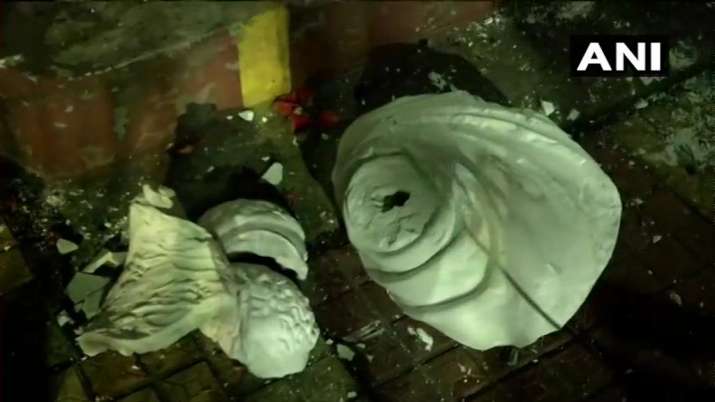 (This is a developing story. More details are awaited)