Samsung has been making a number of Galaxy M smartphones in the mid-range price bracket. All these smartphones (and many more by other brands) have one major thing in common: a big battery, which seems to be the need of the hour. Samsung has taken this very aspect into deep consideration and decided to launch the Galaxy M51 with a 7,000mAh battery, something we are seeing for the first time.

The Galaxy M51, which comes with 64MP quad rear cameras, a humongous 7,000mAh battery, a Qualcomm Snapdragon 730G processor and a Super AMOLED Plus display -- seems like a perfect mid-ranger, which is too good to be true. But, is it really that good a deal under 30K? Read on IndiaTV Tech’s review to find out.

The Galaxy M51 has taken forward the looks of any other Galaxy M smartphone and doesn’t give us anything extraordinary. We get the same rectangular rear camera module in the top left corner and the Infinity-O display with a punch-hole in the middle at the top. With one glance you won’t see any major change and you might feel bored. But it boasts of a minimal design, which will attract a lot of us. It gets two colours options: Celestial Black and Electric Blue, out of which, I got the blue one. With a slightly glossy back, the glasstic (glass+plastic) finish doesn’t appear cheap. This, clubbed with the plain looks, makes the device a decent option. 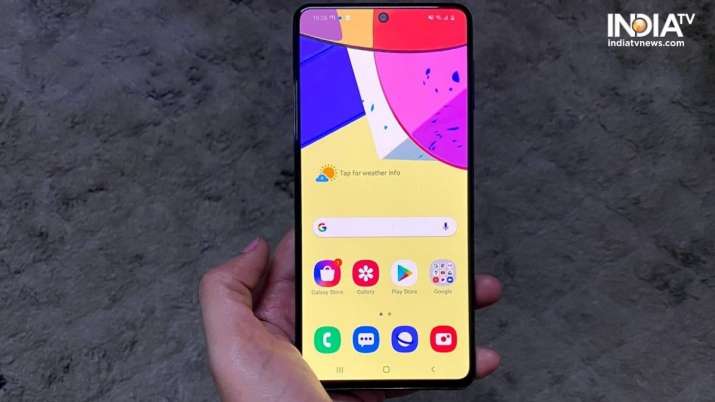 The back just has the camera setup and the ‘Samsung’ branding at the bottom. There is the usual SIM tray on the left side and a volume rocker on the right side. The right side also has the power on/off button that doubles as a fingerprint scanner. The fingerprint scanner’s placement is apt and feels quite easier to reach. 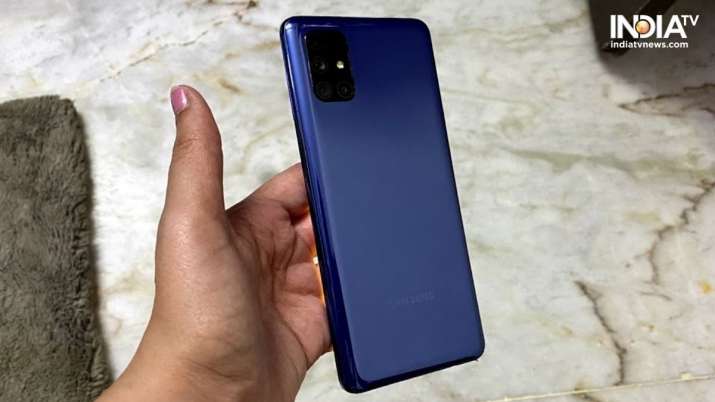 The phone has a weight of 213 grams, which feels slightly heavy. But the 9.5mm thickness doesn’t make too bulky, ensuring easy one-hand usage too.

The Galaxy M51 gets a Super AMOLED Plus display with a Full HD+ screen resolution and a punch-hole in the middle. The Infinity-O screen spans 6.7-inch. Due to a large screen and really fewer bezels, the viewing experience on the phone gets very comfortable and good. The goodness of a Super AMOLED Plus panel is quite evident due to the vivid colours and details that get highlighted. 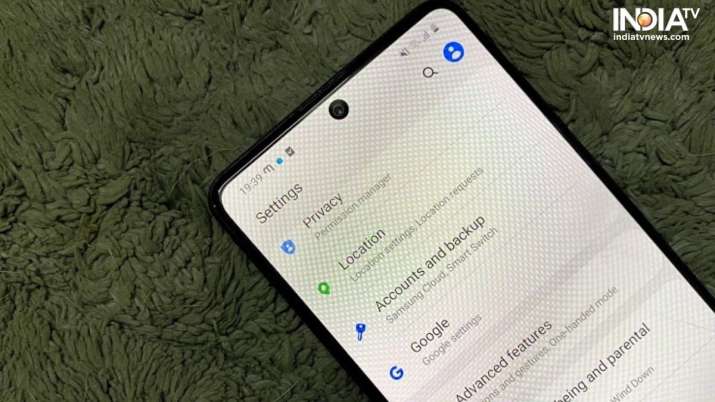 Like most of the Samsung phones, watching videos on YouTube, Netflix, or Amazon Prime was a great experience. However, there are times when the details fail to appear on the display, especially when you watch content at 720p or lower. This may get problematic when the internet problems will cause the videos to lose quality. Additionally, the phone gets several display features such as Adaptive Brightness, Dark mode, Blue light filter, Screen mode (Vivid or Natural), Accidental touch protection, touch sensitivity, and Always-on-Display, which is another good addition. Among others, sunlight visibility was decent.

The cameras are four in number: a 64MP main camera, a 12MP ultra-wide lens, 5MP macro lens, and 5MP depth sensor. There is a 32MP front camera. There are camera features such as LED flash, Live Focus, HDR, Single Take, slow-motion videos, hyper-lapse, panorama, pro mode, and the night mode. 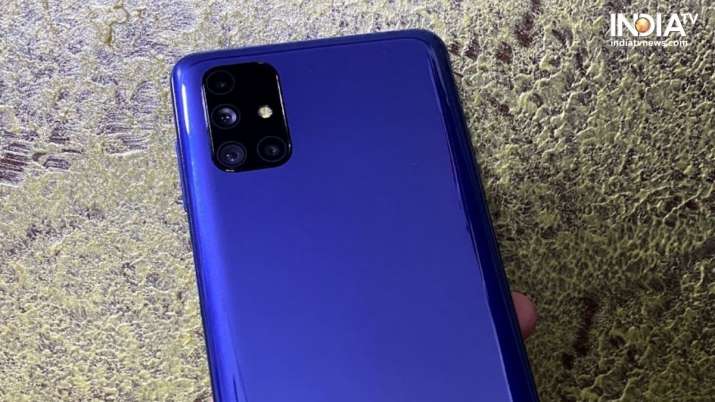 The cameras more or less work like the ones seen on the Galaxy M31s and I am not complaining. The rear cameras produce bright and vivid images that are enhanced to appear picturesque. With this, we also get details in the pictures, which is always a good thing. The ultra-wide mode captures a good amount of area and does not cause any colour-shifting issues. This is a major upgrade. The macro lens captures some good-quality close shots. While zooming in can cause the image to get grainy, the overall output has been improved when compared to the previous Galaxy M smartphones. The Live Focus mode works fine and creates a decent bokeh effect that can be adjusted while or after the image has been clicked. The device also gets the Single Take feature, which clicks multiple images and videos to give out the best shot. The feature has been taken from the high-end Galaxy S20 series and works pretty well. It gives out a decent output with apt editing, which is pretty useable. There is a digital zoom of up to 8x, which gets quite blurred by the time it reaches the maximum limit.

The front camera captures images both in wide and ultra-wide modes. The images are decent and offer details. But, they are processed and mostly oversaturated. This is one problem area in Samsung phones. While the images aren’t bad, they are too smoothened out to be good enough. Among others, the videos came out decently.

Here are the Galaxy M51 specifications:

The Galaxy M51 is loaded with a Snapdragon 730G and gets two RAM/Storage options: 6GB/128GB and 8GB/128GB. I got the latter variant for review. The smartphone was able to sail through most of the tasks that came it's way. Watching videos, scrolling through apps, using the internet, taking images, and playing games were all easy. Switching between apps with numerous open in the background didn’t invite any trouble. The device mostly ensured smooth usage. However, there have been times when scrolling through stuff slowed down, giving a hint of some minor lagging. It wasn’t major though. The fingerprint scanner was pretty quick and the placement ensures further convenience. The Face Unlock was snappy too. The audio quality was decent but could have been louder. Playing games was convenient and high-graphic ones like CoD (Call of Duty) was smooth without much battery drop. 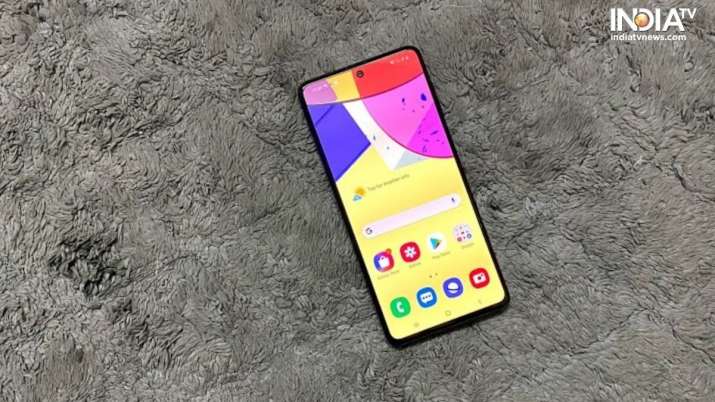 The major USP of the Galaxy M51 is its 7,000mAh battery with support for 25W fast charging. And, truly it is the main attraction. The device gives you this feeling of not having to worry about charging your device every day and if you have forgotten your charger at home, you will still be fine. The battery, with the aforementioned usage, lasted me more than 1.5 days and around 5 to 6 days on standby. This sounds pretty good and set a new benchmark for many smartphones out there. The fast charging, however, isn’t that impressive. The phone will take over an hour to fully charge and this calls for better fast charging capabilities in Samsung mid-rangers.

The OS is clean and smooth. You don’t face a lot of issues and more often than not, the usage is easy. But the constant My Galaxy notifications and the bloatware in the forms of apps such as Facebook, Netflix, ShareChat, Mx Taka Tak, Moj, and Snapchat, is a problem. Instead of feeling useful it feels more like an attempt to promote the Indian TikTok alternatives and I am sorry, but I am just not into it. Maybe, this can be toned down a bit.

The Samsung Galaxy M51 is a pretty decent mid-ranger. Starting at Rs. 22,999, the devices gives you a monstrous battery, good camera, and a good display. However, the not-so-fast charging, the bloatware, and the usual and boring design can act as downsides. The phone competes with the OnePlus Nord with a better Snapdragon 765G processor.

People who intend to go for a Samsung mid-range phone can totally go for this option for the battery capacity and other things too. This is an option that won’t disappoint.