Virat Kohli and Mayank Agarwal played unnecessary shots and got out when all they had to do was bide their time and put in the hard yards.

Kyle Jamieson might have been warming the bench on a cold, windy day in Wellington had Neil Wagner not been on paternity leave but given an opportunity to shine, the 6ft 8 inch-tall bowler made the most of an opportunity that came to him by chance.

His tall frame and ability to hit the corridor of uncertainty regularly troubled India in the preceding ODIs as well but on Friday, Jamierson's balls were unplayable for large parts and in the process, he got two of Test cricket's prized scalps in Cheteshwar Pujara and Virat Kohli.

Trent Boult and Tim Southee started proceedings for New Zealand after Kane Williamson put the visitors in to bat first after winning the toss. But, the duo despite the windy conditions, couldn't bother the Indian batters much in terms of troubling them with their line and lengths. However, the introduction of Jamieson changed the scenario and the quick wickets of Pujara and Kohli were a testament to his consistent bowling.

The 25-year-old looked to bowl length deliveries and invite the batsmen to drive with three slips waiting in the wings for an edge. With awkward bounce helping his cause as well, Jamieson was proving difficult to play as the batters were forced to sit back in order to counter the bounce generated from even length balls.

And, that is how he got Pujara out.

He bowled one around short of length and it straightened a bit and his tall frame getting extra bounce got Puajara all squared up and the ball deflected off the shoulder of the bat and went straight to the BJ Watling behind the stumps. He couldn't have asked for a better start to his Test career. 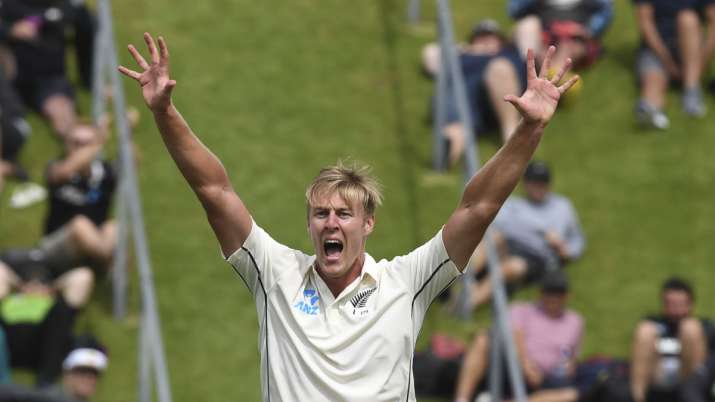 Hanuma Vihari's number was next and much like Pujara, a ball pitched on off with slight movement did the trick. Vihari had to play that and once again the extra bounce extracted an edge of his bat and went straight to Watling, who took a diving catch to his right. Another peach of a delivery from the debutant.

But, the story is not just a Jamieson appreciation post. India did have their fair share of mistakes, thus, resulting in the score 122/5 at the end of day one.

Both the openers, on different stages, fell prey to Southee and Boult because of their own mistakes. While Mayank threw his wicket away after settling in and weathering the storm, Shaw's continuous tendency of shuffling and trying to flick on the off-side cost him once again.

The 20-year-old, who was returning to Test cricket after a lengthy spell on the sidelines for various reasons, started off well. In typical Shaw fashion, he crunched two fine boundaries but once again, saw his stumps knocked out after transferring his weight in front and failing to counter the swing and in the end, missing the line and getting bowled. This is the third time he has fallen this way and on a day when seeing off the new ball was of immense importance, Shaw's inability to hold fort is an area of concern.

Mayank, on the other hand, would be kicking himself after the way he got out. After becoming the first Indian in 30 years since Manoj Prabhakar to survive the first session of a Test match in New Zealand, he came out and went for a swivel-pull too early after the break -- only to top edge to long leg, where Jamieson completed a fine catch.

India's hopes will now be pinned on Ajinkya Rahane (38*) and Rishabh Pant (10*), who surprisingly made his way back into the team ahead of Wriddhiman Saha. The move showed the horses for courses theory of going with a batter in challenging batting conditions and a better keeper on Indian pitches but the pressure of retaining his place now will now be on Pant and on Friday, he handled that fairly well.

With another overcast day in store on Saturday, Pant and Rahane will have to once again see off the Jamieson threat and take India close to at least 250 to stand a chance of challenging New Zealand in the first Test. But, as of Friday, honours to New Zealand courtesy Kyle Jamieson.