However, Congress president Rahul Gandhi and Bahujan Samaj Party (BSP) supremo Mayawati will not share the stage with Opposition leaders at the big anti-BJP show.

With Bharatiya Janata Party's recent defeats in the Hindi heartland states of Rajasthan, Madhya Pradesh and Chhattisgarh, Mamata Banerjee has raised the pitch to be united against the saffron party in the 2019 general election.

Extending his support, Rahul Gandhi wrote to the West Bengal CM expressing hope that the rally would 'send a powerful message of a united India'.

"I extend my support to Mamata Di on this show of unity and hope that we send a powerful message of a united India together," Rahul Gandhi wrote in the letter.

The Congress chief commended the 'great people' of Bengal, who had 'historically been at the forefront of defending our ideals'. 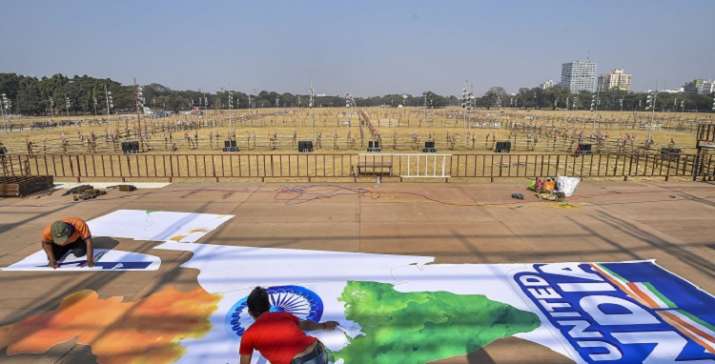 A thick security blanket has been thrown on the sprawling Brigade Parade Ground - the venue for rally - to prevent any untoward incident.

Large scale preparations have been made to ensure that it is a complete success. Besides the huge podiums, 20 watch towers have been erected and 1,000 microphones and 30 LED screens put up so that the spectators can see and hear the speeches of the leaders clearly.

Lakhs of TMC supporters and workers are expected to attend the rally and huge numbers of them from various corners of the state have already started pouring into the city. They have been put up in the outskirts of the city and in some auditoriums and stadiums.

Hundreds of TMC volunteers will be on the grounds to take care of supporters.

As many as 10,000 police personnel will be deployed and around 400 police pickets have been set up to ensure foolproof security, the police said.