"We are ashamed of Kapil Mishra and also that he studied Social Work in our college," the Delhi School of Social Work (DSSW) students' union said

Kapil Mishra's alma mater Delhi School of Social Work’s (DSSW) students’ union has come down heavily on the Bharatiya Janata Party leader for “organising” the Delhi riots, as it called upon the Delhi Police to arrest him immediately.

The release was titled, ‘Mr Kapil Mishra, you don’t deserve to be called DSSW alumni’.

“In one way, we have a glorious past and on the other hand we also have blot(s) such as our alumni BJP leader Kapil Mishra, who has organised recent Delhi riots and incited mob(s) to disturb communal harmony of the city,” the statement said. 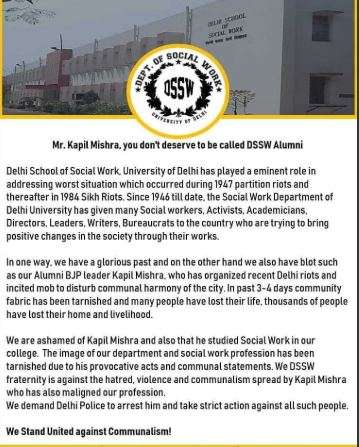 The students’ union said that they were “ashamed” that Mishra studied at the college, which otherwise had produced alumni who had played a constructive role during the major communal events such as the 1984 anti-Sikh riots as well as the Partition riots in 1947.

“The image of our department and social work profession has been tarnished due to his provocative acts and communal statements,” said the statement.

“We DSSW fraternity is against the hatred, violence and communal violence spread by Kapil Mishra who has also maligned our profession,” it added.