With US President Donald Trump's visit round the corner, Agra is galloping to look the best. The authorities have taken up various works including removing encroachments, beautifying crossings and widening of roads. But there is a roadblock. The dilemma lies between Trump and the road leading from the Agra airport to the Taj Mahal.

With US President Donald Trump's visit round the corner, Agra is galloping to look the best. The civic authorities in Agra have taken up various works including removing encroachments, beautifying crossings and widening of the roads. The importance of Trump's Agra visit is underlined by the fact that Uttar Pradesh Chief Minister Yogi Adityanath personally visited Taj Mahal to take stock of security preparation. But there is a roadblock. The dilemma lies between Trump and the road leading from the Agra airport to the Taj Mahal. POTUS is scheduled to visit India on February 24 and 25.

The distance from Delhi to Agra (Taj Mahal)  is 243 kms if one takes the Taj Expressway. If President Trump takes the route, more than 10,000 police force and over 100 secret servicemen are expected to provide overarching security on-road and in air. 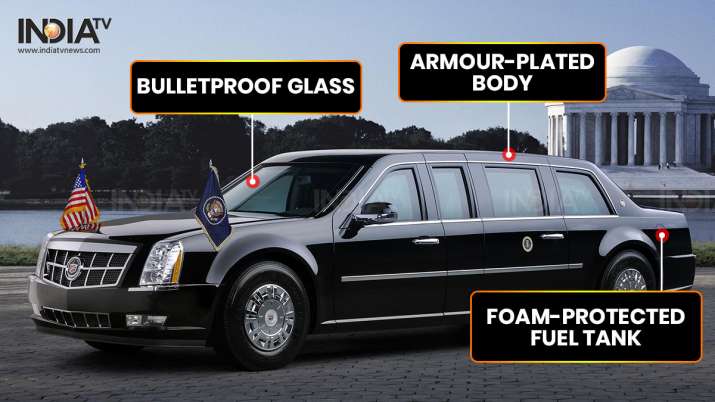 The civic authorities in Agra have a big dilemma as of now. Donald Trump cavalcade will pass through over 40-year-old Sarai Khwaja Railway bridge, which has been declared unfit for heavy vehicles. Can President Trump's armoured limousine -- The Beast -- weighing almost 6.5 tonnes, pass through the same bridge along with his 70-vehicle cavalcade?  Agra municipal authorities have deployed a number of departmental officials to ascertain if the bridge is safe enough for the US President's vehicle to pass through it.

Also Read: What POTUS brings along with him

Not just that, as per protocol, the President's Secret Service team will be inspecting the route. If the Secret Service raises a red flag over the route, President Trump's Agra visit might be in jeopardy. However, it would be interesting to see if POTUS flies to Agra in his Marine One helicopter if the roads are not viable.

Adding to the woes, the road is filled with potholes and the bridge's railings have fallen off. The route has several warning notices on the bridge prohibiting heavy vehicles from passing through the bridge as it is in a bad shape.

This could pose as a huge roadblock if the bridge is declared unsafe for the US President's movement since there no alternate arrangement has been made for the cavalcade to pass through.

However, it must be noted that Donald Trump is not the first US President who would be visiting Agra to get a glimpse of the historic Taj Mahal. Former US President Bill Clinton has also visited Taj Mahal.

PS: When late US President Dwight Eisenhower visited the Taj Mahal with then Prime Minister Pandit Jawahar Lal Nehru, they took an open car ride. People line up the road and raised slogans like "Long Live Indo-US friendship" NR Smith a veteran journalist was quoted by the Economic Times.

Also Read: US Air Force plane with security equipment lands in Ahmedabad ahead of Trump's visit