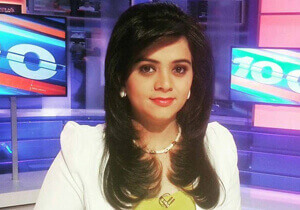 Hello my name is Surbhi R Sharma, graduated in mass communication and journalism from Punjab university. Further went on taking workshops on anchoring , news reading , voiceovers , radio jokey from International Institute of Mass media .
My association with broadcast journalism has been from the past 18 years . Currently working on as an Senior  Executive producer and an anchor for a leading news channel , India Tv covering genres from political , social interest , women welfare to sports and entertainment.

Some of the highlights of my carrier have been conducting special shows and live bulletins on the Lok Sabha and assembly elections including on the spot coverage and live reporting of campaigning and rallies .

Spearheaded special shows on Nirbhaya Delhi Gang rape by doing live chats with her family members and further more reporting live from the court during Trial as well as judgement day .

Regulated special coverage of the public protest at the India gate during the Lok Pal movement as well as Live reporting from Tihar Jail on Anna Hazare’s arrest .

Conceptualised and reported on a special show called “ Election express” where my team and I travelled in trains gathering opinions of the people on Lok sabha elections.

Some of the other special shows that have been co produced and anchored by me are “ sasti trolley , mehengi trolley “ during the Union Budget ,  “ security and safety check with a female politician “ during the Rail Budget , “ Live reality check “, a show based on the security of women in Delhi , Ram mandir and Ayodhya verdict to the very recent coverage on site from Shaheen Bagh regarding the CAA protest .