Realme could launch a gaming phone and more products on May 25: Know what they could be

Realme is soon to launch new products in its portfolio on May 25 in China. Read on to know more

Realme seems to be continuing its ritual of launching new products in short intervals as the Chinese company will be hosting an event on May 25 in China. Realme is expected to introduce as much as 8 new products and has begun releasing teasers for the same. Read on to know what new Realme is set to bring to our tables.

Realme event on May 25: 8 new products

According to a post on Chinese micro-blogging site Weibo, Realme has teased the launch of 8 new products on May 25 in China at 2 pm. While the teaser image doesn't reveal much about the May 25 event, it does feature a smartphone, a power bank, and truly wireless earbud, suggesting that these products will be among the ones to be launched on May 25. Additionally, Realme has suggested that it will launch a 'mysterious new mobile phone.'

Another teaser (posted by Realme China CMO Xu Qi Chase) appeared on Weibo giving us an inkling as to how the smartphone could look like. As per the post, the smartphone features vertically-aligned quad rear cameras with the Realme logo placed vertically on the left side, much like the one in the teaser image by the company. Additionally, it features a reflective back and is codenamed 'Blade Runner.' 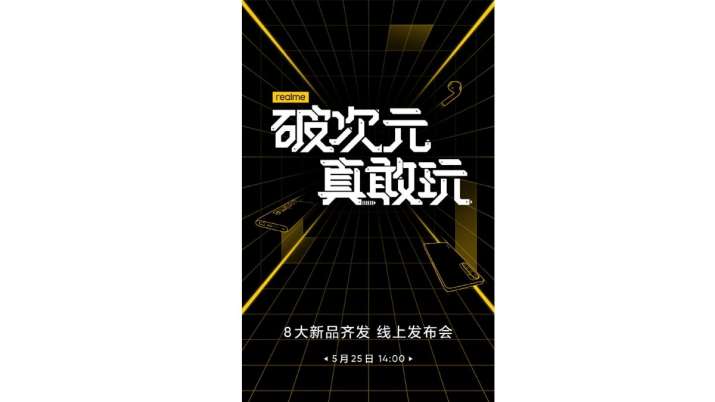 While not much is known about the upcoming Realme smartphone, it could be a Realme gaming phone and be powered by the Qualcomm Snapdragon 865 processor. As for the other products, Realme is expected to launch the Realme Buds Air Neo, which recently appeared on the Taiwanese National Communication Commission (NCC) and a power bank. However, there is no word on the other products.

As a reminder, the aforementioned information is a rumour and we lack concrete information on the products to be launched on May 25. Hence, we need to wait until the May 25 launch event. Hence, stay tuned for more information.