President Donald Trump flooded his first postelection political rally with debunked conspiracy theories and audacious falsehoods Saturday as he claimed victory in an election he decisively lost. A sampling from his remarks in Valdosta, Georgia:

THE FACTS: There’s no “if.” He lost, refuses to concede, hasn’t congratulated the winner and persists in allegations of election malfeasance that courts and officials across the breadth of battleground states and in Washington have found meritless.

THE FACTS: This is a grossly false tally and one example among many of Trump grasping at the thinnest of straws. Millions of people watched Biden’s Thanksgiving remarks.

The bogus claim that fewer than 1,000 watched appears to have grown from a screenshot someone posted on Twitter showing the number of viewers at one point tuned into a single live stream of the speech. But Biden’s Thanksgiving address a day before the holiday streamed live on multiple major media sites — each with its own viewer count — and netted more than 1 million online views over the first few days, as measured by just a sampling of sites.

A video of Biden’s speech on his official Facebook page alone showed more than 540,000 views, and more than that watched on NBC’s and ABC’s YouTube channels combined.

Biden put out a shorter video on the holiday itself. It registered more than 5 million views on Twitter a day later.

TRUMP, suggesting ballots were found in nefarious places: “When the numbers come out of ceilings and come out of leather bags you start to say what’s going on.?” 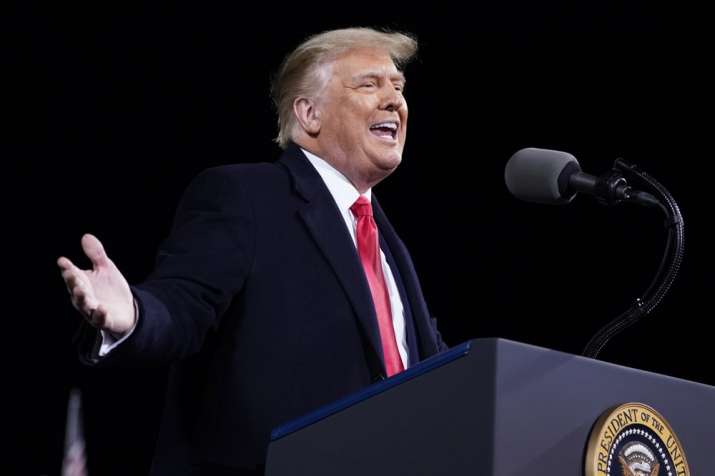 THE FACTS: Nothing out of the ordinary was going on. This remark was the latest iteration of a false claim he has spread around about ballot-stuffed suitcases found under a cloth-covered table and tallied without supervision.

A video distributed on social media and shared by Trump featured surveillance footage of ballot processing on election night in Atlanta. It showed regular ballot containers on wheels — not suitcases — and both a state investigator and an independent monitor observed counting of those ballots until the job was done for the night, state and county officials said.

Courts and election officials in battleground states across the country have systematically shot down Trump’s persistent accusations that the election was rife with fraud.

TRUMP on the now-settled presidential contest: “We’re winning this election.”

THE FACTS: No, it’s over and Biden defeated him.

When California certified its presidential election Friday, that put Biden over the top in the Electoral College, pushing his certified electoral-vote total past the threshold of 270 needed to become president. He reached 279 electoral votes and is on track to finish with 306 to Trump’s 232 once more states certify their results.

The electors will meet Dec. 14 in their states to make the national result formal.

TRUMP: “We won Georgia, just so you understand.”

THE FACTS: No he didn’t.

Trump lost Georgia in an election the state has certified for Biden. Republican election officials have affirmed the election was conducted and counted fairly. No credible claims of fraud or systemic errors have been made.

An audit was initiated by Secretary of State Brad Raffensperger, a Republican, and that triggered a full hand recount that confirmed Biden’s victory in Georgia. Gov. Brian Kemp, also a Republican, refused Trump’s request Saturday to call a special legislative session to try to subvert the outcome.