Violent anti-Citizenship Act protests continued to hit headlines on Friday as the epicentre of the protests widened to take Uttar Pradesh in its hold alongside Delhi. For almost the entire day, people agitated against Citizenship (Amendment) Act and National Register of Citizens (NRC) across UP in protests that took violent turn.

Violent anti-Citizenship Act protests continued to hit headlines on Friday as the epicentre of the protests widened to take Uttar Pradesh in its hold alongside Delhi. For almost the entire day, people agitated against Citizenship (Amendment) Act and National Register of Citizens (NRC) across UP in protests that took violent turn. Protesters clashed with the police, burned down vehicles as police had to resort to lathi charge to control and disperse the crowd. Internet services remained suspended in about a dozen districts, including Aligarh, Mau, Azamgarh, Lucknow, Kanpur, Bareilly, Shahjahanpur, Ghaziabad, Bulandshahr, Sambhal and Allahabad.

In Delhi, thousands gathered at Daryaganj near the iconic Jama Masjid. There were scuffles with the police and a car was set alight by a mob in the evening just outside Daryaganj police station.

In Uttar Pradesh, 6 persons lost their lives during the protests. Director General of Police O P Singh told PTI that two people lost their lives in Bijnor and one each in Meerut, Sambhal and Firozabad. But officials reported a death in Kanpur as well. Cities like Kanpur, Bulandshahr, Bahraich, Gorakhpur and Firozabad were badly hit as crowds scuffled with the police, set fire to vehicles including those of the police. 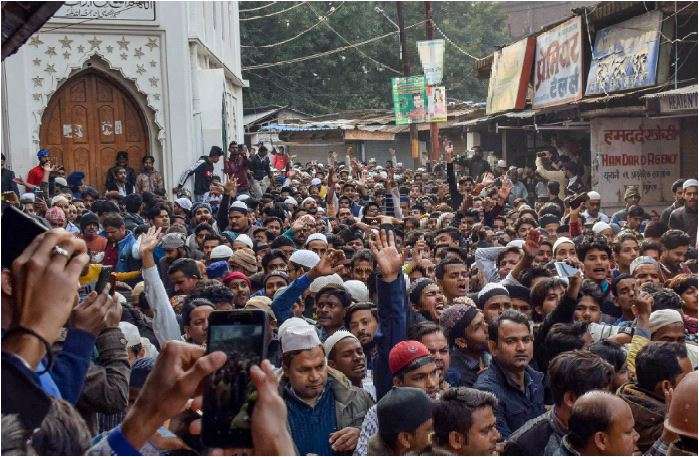 In Gorakhpur, protesters went berserk during demonstrations against Citizenship Act. During protests held after Friday prayers, the agitators threw stones against police officials. People in large numbers came out of mosques such as Jama Masjid and Madina Masjid here

Police fired teargas shells to disperse the violent protesters outside Anjuman Islamia in the Khoonipur area. 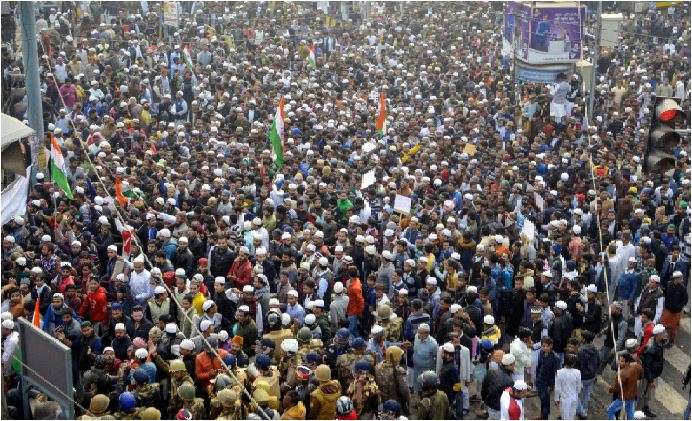 Half a dozen vehicles, mostly of policemen, were also torched in Kanpur’s Babupurwa area and six people were hurt in the city, Additional DG (Kanpur zone) Prem Prakash said.He said 10 people allegedly involved in arson and stone- pelting were arrested. 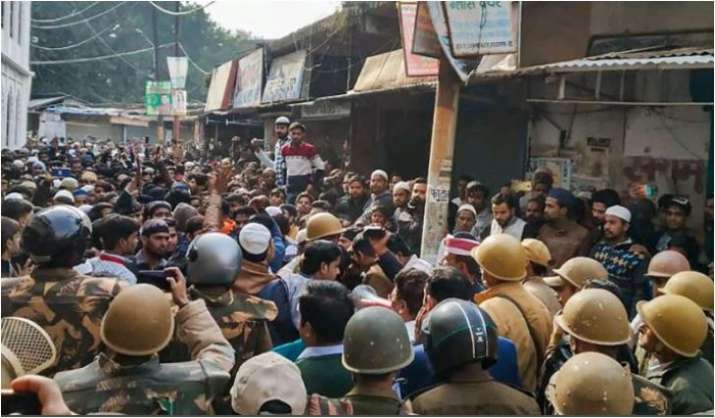 Protesters demonstrating against the amended citizenship act torched a police vehicle in Uttar Pradesh's Bulandshahr after which internet services were suspended across the district on Friday, officials said.

The order for internet suspension was issued to contain the spread of rumours and misinformation on social media, District Magistrate Ravindra Kumar said.

A stationary police SUV was torched.

In Meerut’s Islamabad locality, protesters targeted a police post, setting fire to some furniture and a motorcycle parked nearby.

At least six vehicles, including those of police, were set ablaze in Firozabad, forcing police to use tear-gas shells to disperse the mobs. 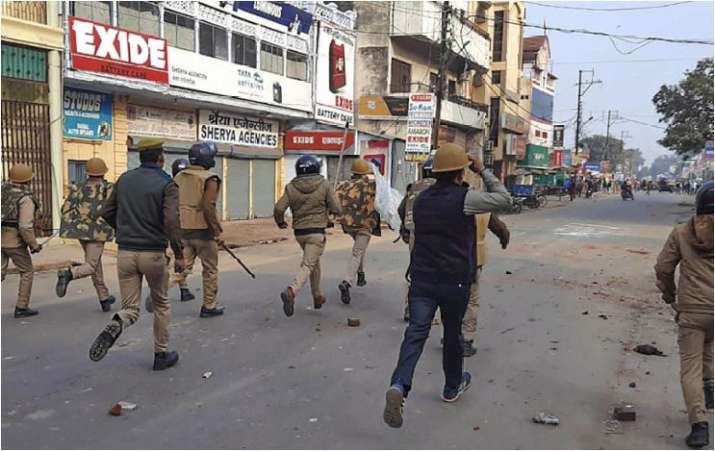 Bahraich was another place where widespread violence took place. In Bahraich, six people, including two policemen, were injured. Around 40 men were arrested there. 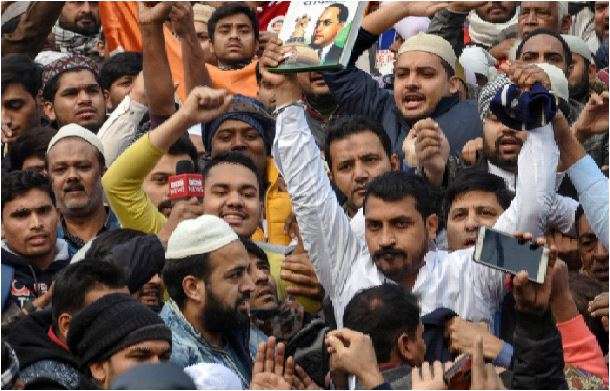 The national capital remained heavily barricaded but prohibitory orders and closure of several metro stations could not stop thousands from rallying near Jama Masjid area, soon after Friday afternoon prayers. As the day drew to a close, the protesters gathered at India Gate and Central Park, while carrying tricolour and 'Save Constitution' banners and also raising slogans against what they called attempts to divide the country on religious lines.

Bhim Army chief Chandrashekhar Azad led one of the largest protests, despite being denied permission to hold a march. Giving the police a slip from being detained, he raised slogans and read out the preamble of Indian Constitution.

Protesting mob torched a car just outside Daryaganj police station in the evening. 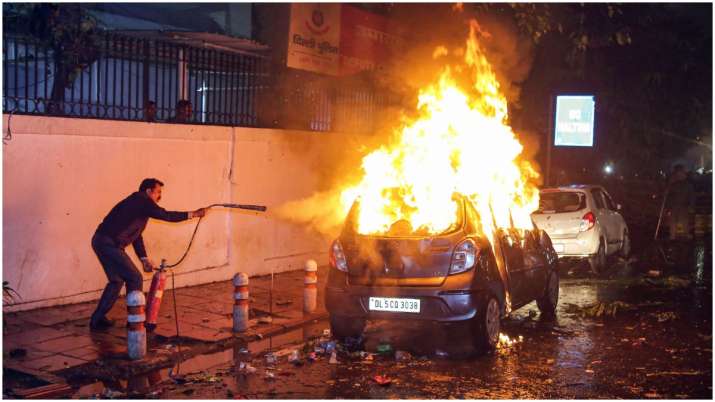 The police was seen using drones to keep a vigil, while Delhi Metro gates were closed at some stations, including in the Old Delhi areas.

Police also carried out a flag march in the north-east district which had witnessed violence on Sunday during continuing protests against the amended law, which seeks to grant speedier citizenship only to non-Muslims facing religious persecution in Pakistan, Bangladesh and Afghanistan. 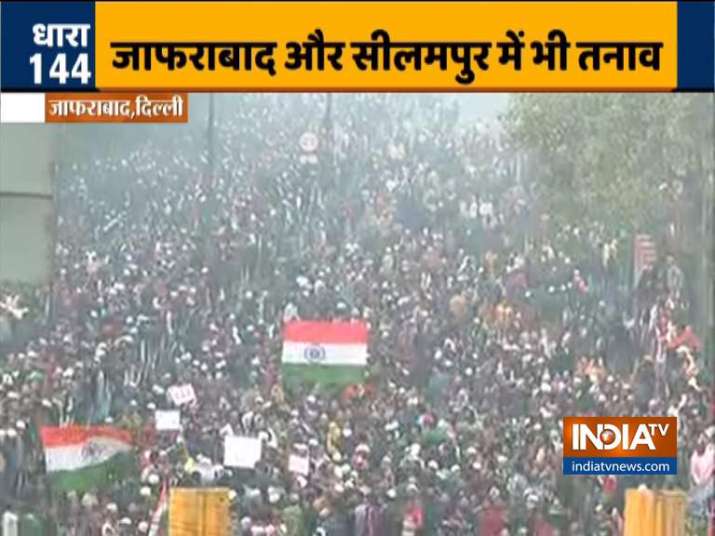 Situation in areas like Jafrabad, Seelampur remained tense as thousands gathered in streets to protest. Even when the authorities tried to contain the situation there was tension in the air. Protesters in Jafrabad on Friday, set fire to police vehicles.

Violent Protests elsewhere in the country 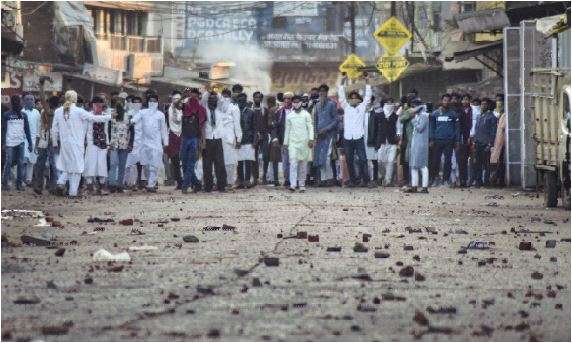 Curfew was imposed in Gohalpur and Hanumantal police station limits in Jabalpur city of Madhya Pradesh on Friday following violent protests against the Citizenship (Amendment) Act.

There were reports of sporadic violence from Maharashtra and Karnataka-Kerala border areas as well,

Holding a protest march in Maharashtra, the All India Majlis-e-Ittehad-ul-Muslimeen (AIMIM) alleged the Narendra Modi government wants to ensure only Hindus remain in India with its twin move of the new Citizenship (Amendment) Act and the proposed countrywide National Register of Citizens (NRC).

Watch | It is because of Modi government's anti-people decision that led to violence, says Sonia Gandhi