On the occasion of Father's Day 2020, Bollywood superstar Aamir Khan's daughter Ira shared an adorable photo with her father. However, what caught everyone's attention was the actor's 'grey hair' look that left Netizens super impressed.

June 21 was observed as Father's Day all over the world. People took to their social media to share photos with their father and write long messages on how their superheroes have always been got their back. Similar was the cast with our favorite Bollywood celebrities who either shared pictures with their father or their children. How could Bollywood superstar Aamir Khan's daughter Ira Khan lag behind in wishing our 'Mr. Perfectionist?' Taking to Instagram the lady shared a photo with her dad that caught everyone's attention. Want to know why? Read to find out more.

The Instagram post was captioned, "Happy Father’s Day! Thanks for being you." But what caught everyone's eyeball was the brand new, fully grey hairstyle. Apart from it, he was seen wearing a navy blue coloured T-shirt, square and grey glasses that perfectly matched his hair. Have a look at her post here:

Soon the picture not only caught the attention of her fans but also Sanjay Dutt's daughter Krishna Shroff, Aamir's Dangal co-star Fatima Sana Shaikh and Sanya Malhotra and also actor Gulshan Devaiah who wrote, "Papa kehte hain bada nam karegi." While for the fans, they left comments like "Wow , this is such an amazing photo," "Aamir is looking so nice , as always," "Now he looks father in grey hair," etc. Have a look at some more reactions here: 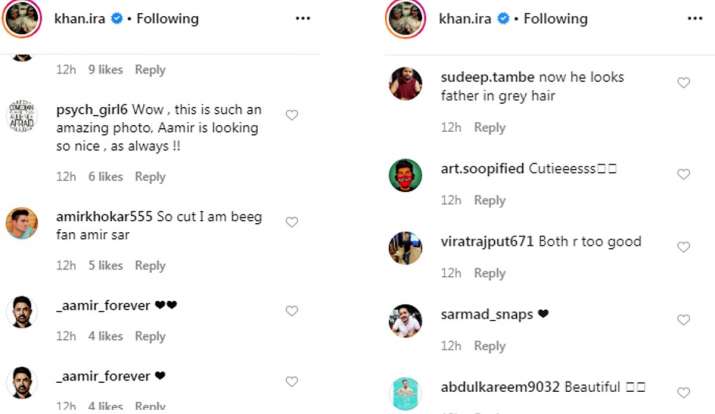 Aamir Khan and his family has been quarantining in lockdown together since March. If we talk about Ira, she is one of the most active celebrity kid on social media and keeps on sharing photos with Aamir, Kiran Rao and brother Azad Rao Khan. Check out some of her posts here:

And it begins! @zaynmarie I love you to bits and I'm so proud of you and happy for you. Quarantine or not, WW3 or not, bad week or great year, we'll always be there to go through it with you. Through the great and the terrible! Fan girlling you at the poster and embarrassing on the red carpet. I'm sorry we weren't physically with you. But I'm sure you could hear the hooting and cheering in Panchgani! Congratulations on the beginning of your career in the film industry🤗❤ . . . #zanyforzayn #hottie #sisterlove #proud #tearsofjoy #celebrate #debut #zaynmariekhan

My buddy for the day❤ . . . #catlady #kubla #cat #grumpycat #mykindoflove

Santa's helper🧝🏻 I even have the ears for it! . . . #throwback #christmas #missing #santashelper #elf #elfears #fashiondiaster #film #nostalgia

On the professional front, Aamir will next be seen in Laal Singh Chaddha opposite actress Kareena Kapoor Khan. The film happens directed by Advait Chandan happens to be the official remake of the 1994 Hollywood blockbuster film 'Forest Grump', which stars Tom Hanks, Robin Wright, Gary Sinise.