Bollywood actress Parineeti Chopra is gearing up for her next project which happens to a biopic of ace Indian badminton player Saina Nehwal. She is busy going through rigorous training sessions to get into the skin of her character and that is the reason why her social media is filled with pictures and videos from her badminton sessions.

However, she currently got trolled by her team members about which she informed her fans by sharing a picture on her Instagram account with a caption that read, “Hey guys, did you take any cool pictures of me training today? This is what they sent,” followed by face-covering monkey emojis. In the image, she can be seen lying down with her eyes closed on the badminton court wearing a pair of purple coloured tights and printed jacket.

As soon as she posted the picture, her comments section was filled with comments from her fans making fun of her. Not just her fans but the picture also caught the attention of Saina who also commented with a laughing emoji. Check it out: 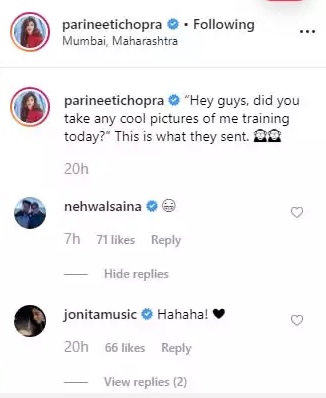 Parineeti opened up about her practice sessions in an interview she gave to Mumbai Mirror and said, “Prep usually starts early because we have booked courts in slots where there are no distractions of any kind. We start at 6 am and wind up by 8 pm. I will have to live this regimented life for the next nine months, but I am pretty kicked about it. I want to do justice to the film and to Saina.”

As per a report in Mumbai Mirror, actor Manav Kaul will be seen playing the role of her coach. They were informed by a source who said, “(Director Amole Gupte) and his team felt that Manav would suit the role. He has begun prep and the research for his role. The film is expected to go on the floors from October.”