West Indies' Chris Gayle opened up on 'racism in cricket' following the death of George Floyd in the US.

West Indies' star batsman Chris Gayle has joined a list of athletes who have expressed their outrage in the wake of George Floyd's death in the US. Gayle has that racism is not there only in football but cricket too, adding that he has faced racial remarks during his travel even within the teams which include a majority of Black men.

Taking to his official Instagram profile, Gayle said, "Black lives matter just like any other life! Black people matters. P***k all racists people. Stop taking black people for fools! Even our own black people, wise tha P***k up and stop bringing down your own ffs!!!"

Society is 'more divided than ever', says Marcus Rashford on George Floyd's death

He further wrote, "I've travel the globe and experience racial remarks towards me because I'm Black, believe me...the list goes on!!!

"Racism is not only in football, it's in cricket too!! Even within teams as a Black man I get the end of the stick!!! Black Powerful! Black & Proud!" 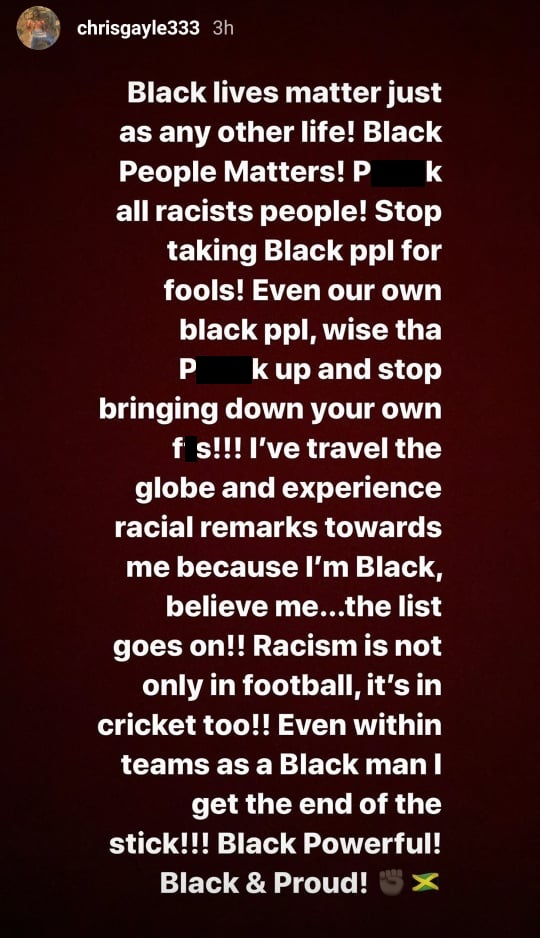 In the United States, the people have come to roads in protest against the death of George Floyd. He died after a white police officer, Derek Chauvin held him down in a hand-cuffed state with a knee on Floyd's neck, even as the latter repeatedly said, "I can't breathe."

In the Bundesliga, a host of footballers paid tribute to George Floyd. Borussia Dortmund's Jadon Sancho revealed his t-shirt which wrote, "Justice for George Floyd' after he scored a goal against Paderborn on Sunday.

Borussia Monchengladbach's Marcus Thuram, too, sat down on his knee after scoring a goal to register his protest and condemn the death of Floyd.