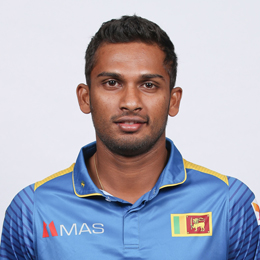 A seam-bowling all-rounder that Sri Lanka will definitely use in the 2019 World Cup as he also possesses a genuine ability to strike the ball, both of which could prove useful in the English summer. Having burst onto the T20 scene with a 3/16 against India in Pune, Shanaka soon found himself into the longer formats sides pitching in with impressive cameos with the bat to go along with the fruits off his bowling. In a way, he supplements Sri Lanka's current strategy of picking players based on talent rather than just their records.

The squad was announced by Sri Lanka Cricket after getting formal approval from sports minister Namal Rajapaksa.

Shanaka, who was named Sri Lanka's T20 captain last week, was not allowed to board the flight with his teammates on Monday over his failure to arrange a new transit visa to the USA.