Masked men armed with sticks entered the campus of Jawaharlal Nehru University on Sunday, beating up teachers and students.

Masked men armed with sticks entered the campus of Jawaharlal Nehru University on Sunday, beating up teachers and students.

The president of the Jawaharlal Nehru Students' Union (JNUSU) Aishe Ghosh and general secretary Satish Kumar Yadav were beaten up in the attack and rushed to the All India Institute of Medical Sciences (AIIMS). Ghose and Yadav were among at least 40 students and faculty members injured in the attack. Professor Sucharita Sen from the Centre for the Study of Regional Development was among the faculty members injured in Sunday's assault. 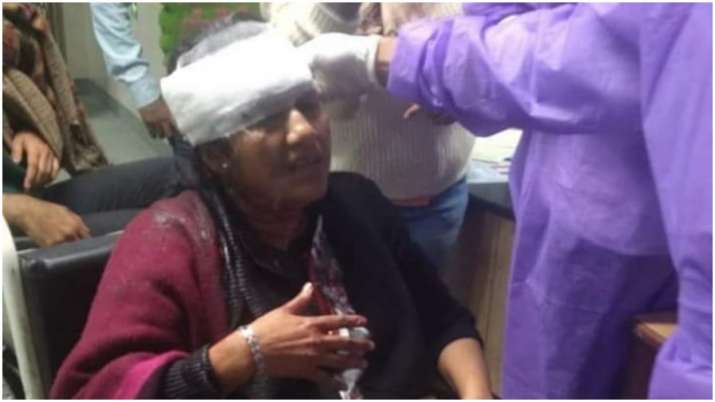 At least seven ambulances had to be rushed to the university campus to bring the injured to the hospital.

Eyewitnesses present at JNU at the time of the attack say that it all started between four and five in the evening, following which students and teachers on the campus scrambled for cover.

There were two rounds of attack, the first one starting when the protest against the hostel fee hike was taking place, said Ranjani Mazumdar, an associate professor at the university. The second attack started around seven PM, with the mob assaulting anyone they spotted and smashing windowpanes of the buildings on the campus, she added. The attack happened at several hostels on the campus.

In a strongly-worded statement, the Jawaharlal Nehru University Teachers' Association (JNUTA) blamed the Akhil Bharatiya Vidyarthi Parishad (ABVP) for the alleged assault. "The ABVP, in police presence, is moving around with lathis, rods, hammers with their faces under masks. They are pelting bricks, climbing over walls and getting into hostels and beating up students. Several teachers and students have also been beaten up. JNUSU President Aishe Ghosh has been brutally attacked and her head is bleeding very badly," said the statement.

The All India Students Association (AISA) also condemned the ABVP for the attack, saying in a statement that the ABVP had been attacking the JNU students who were protesting the massive fee hike.

"Yesterday a mob led by Ritwik Raj who is councillor from the School of International Studies (SIS) belonging to ABVP attacked students. Then they attacked JNUSU President and General Secretary Aishe and Satish and other students," it said.

Videos shot by eyewitnesses show heated arguments and blows being traded between students and the assaulters.

The ABVP has, however, denied the allegations. The student body has, instead, accused the Left-affiliated organisations of instigating the violence.

Left goons have unleashed their red terror in JNU. Armed with sticks, rods, stones, acid they have visited every room of ABVP activist in the hostel to kill them. When they could not stop students from registering, they targeted and brutally attacked them.#RED_TERROR_IN_JNU pic.twitter.com/kogk3A7iwU

01:08 AM: Teachers at Jadavpur University and Jamia Milia Islamia have condemned the violence on the JNU campus on Sunday evening, joining a chorus of voices that have expressed solidarity with students and faculty of JNU.

“The JTA unequivocally condemns the violence unleashed on the students and teachers of JNU by armed goons. The violence that has gone on now for two days and continued unabated for several hours today is a brazen attempt by the administration to terrorise the students and teachers who have bravely put up an unwavering fight to defend the University,” the Jamia Teachers’ Association (JTA) said in a late night statement.

Condemning the violence on students and faculty, the Jadavpur University Teachers’ Association (JUTA) called upon all sections of society to criticise the act.

“If our universities and those who study and work in them cannot be protected from such atrocities, how can we claim to be a civilised nation?” it said.

12: 41 AM: Protests were held at the Aligarh Muslim University (AMU) late on Sunday night against violence at the JNU. A spokesperson of protesting students said that a march was held in the night to express solidarity with the Jawaharlal Nehru University (JNU) students, who were attacked by masked men armed with sticks.

In a statement, the AMU Teachers' Association (AMUTA) condemned the violence.

12:32 AM: The JNU registrar said that four masked miscreants were found hiding on the campus, which have now been detained by the police

12: 28 AM: Delhi Police say that they have restored peace on the campus, after a masked mob attacked the students and faculty members protesting the hostel fee hike. Four persons from JNU have been detained in connection with the violence, police said.

12:07 AM: In a scathing tweet, Congress general secretary Priyanka Gandhi has hit out at Prime Minister Narendra Modi and Union Home Minister Amit Shah over the violence on JNU campus on Sunday evening.

India has an established global reputation as a liberal democracy. Now Modi-Shah’s goons are rampaging through our universities, spreading fear among our children, who should be preparing for a better future..1/2

.. To add insult to injury, BJP leaders are all over the media pretending that it wasn’t their goons who unleashed this violence. The people are not deceived. 2/2

12:01 AM: Weighing in on the instance of violence on the JNU campus on Sunday, Mahindra Group Chairman Anand Mahindra called on the government to hunt down people who "invaded" JNU.

11:51 PM: JNUSU President Aishe Ghose has been admitted to AIIMS with head injuries, according to several reports. She had sustained them after being attacked by a masked mob on the campus in the evening.

11:38 PM: The students at IIT-Bombay organised a flash protest to express their solidarity with JNU students and teachers assaulted by a masked mob on Sunday evening.

11: 30 PM: A huge number of protestors have gathered at the Delhi Police headquarters at ITO to demonstrate against the violence on JNU campus.  Vikas Marg has been closed to traffic movement, Delhi Traffic Police tweeted.

Traffic movement is closed on Vikas Marg due to demonstration. Kindly avoid the stretch.

11:12 PM: Congress general secretary Priyanka Gandhi accused the government of being involved in violence, labelling it as "sickening." Many had broken limbs and injuries and some said that police had hit them on the head," she said, after meeting the victims of violence.

10:59 PM: Bharatiya Janata Party (BJP) has also condemned the violence on JNU campus. "This is a desperate attempt by forces of anarchy, who are determined to use students as cannon fodder, create unrest to shore up their shrinking political footprint. Universities should remain places of learning and education," the party said in a tweet.

We strongly condemn the violence on JNU campus. This is a desperate attempt by forces of anarchy, who are determined to use students as cannon fodder, create unrest to shore up their shrinking political footprint. Universities should remain places of learning and education.

10:50 PM: Union External Affairs Minister S Jaishankar has strongly criticised the violence at JNU campus, saying that it was against the tradition of the prestigious university. One of the two alumni of JNU in the Union Cabinet, Jaishankar took to Twitter to express his dismay over the violence.

Have seen pictures of what is happening in #JNU. Condemn the violence unequivocally. This is completely against the tradition and culture of the university.