Amitabh Bachchan on Friday took to his Instagram to wish his son Abhishek Bachchan on his birthday. Going down the memory lane, Big B shared a 'then and now' picture with Junior Bachchan to wish him on the special day.

Bollywood megastar Amitabh Bachchan on Friday took to his Instagram to wish his son Abhishek Bachchan on his birthday. Going down the memory lane, Big B shared a 'then and now' picture with Junior Bachchan to wish him on the special day. The post is a collage of two pictures. One side shows Big B holding Abhishek's hand and leading him while the other picture shows Abhishek doing the same to him. Big B wrote, "I lead him once holding his hand .. he leads me now holding my hand" The pictures also reads, "Happy Birthday Abhishek Bachchan."

Amitabh Bachchan also shared a picture from the day when Abhishek Bachchan was born. Taking to his blog, he shared a black and white picture of when Abhishek was 'just a few minutes into this world.' In the sweet photo, young Amitabh is seen looking at the new born baby. He wrote, "he has been wished .. he has been decorated with the memories of his birth and connected in this world today on that flat piece of technology that has transformed the very existence of the human." 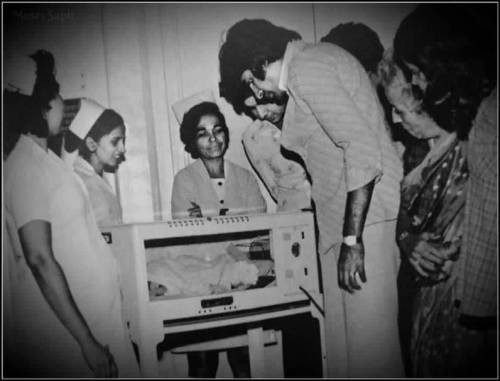 On a related note, Amitabh Bachchan's film Black completed 16 years on Thursday.  Big B feels the Sanjay Leela Bhansali film was way ahead of its time. "It has been 16 years...since Debraj Sahai. Black...a movie way ahead of its time. Every dialogue, every instance in the movie was so beautifully crafted, that it has engraved its existence in everyone's heart, including mine. #16YearsOfBlack #RaniMukerji #SanjayLeelaBhansali," Amitabh Bachchan wrote on Instagram.

In the critically acclaimed film, Big B plays Debraj Sahai, teacher of a specially-abled girl Michelle McNally born with visual and hearing impairment. The character of Michelle was played by Rani Mukerji.

On the work front, Big B has a busy year ahead. He is currently shooting for the Ajay Devgn directorial film MayDay. The 78-year-old actor also has upcoming films like the Emraan Hashmi co-starrer Chehre, Nagraj Manjule's Jhund, Ayan Mukerji's Brahmastra with Ranbir Kapoor and Alia Bhatt, and a yet untitled film co-starring Prabhas and Deepika Padukone.