The Economic Survey 2020: India ranks third in number of new firms created, said Finance Minister Nirmala Sitharaman while referencing World Bank data on entrepreneurship, who presented the Economic Survey 2019-20 in the Parliament today. The survey also said there has been a spur of new Service sector firms as opposed to Manufacturing, Agriculture, or Infrastructure. This is in line with India’s strength as a provider of global services. The Survey noted that reflecting India’s new economic structure, i.e. comparative advantage in the Services sector, new firm creation in services is significantly higher than that in manufacturing, infrastructure or agriculture.Entrepreneurial activityin the services sector is highest  in Delhi, Mizoram, Uttar Pradesh, Kerala, Andaman & NicobarIslandsand Haryana.

The Survey observed that the birth of new firms is very heterogeneous across Indian districts and sectors. Moreover, it is dispersed across India and is not restricted to just a few cities. The literacy and education in the district foster local entrepreneurship significantly. For instance, the eastern part of India has the lowest literacy rate of about 59.6 per cent according to the census of 2011. This is also the region in which new firm formation is the lowest. In fact, the impact of literacy on entrepreneurship is most pronounced when it is above 70 per cent, the Survey says. 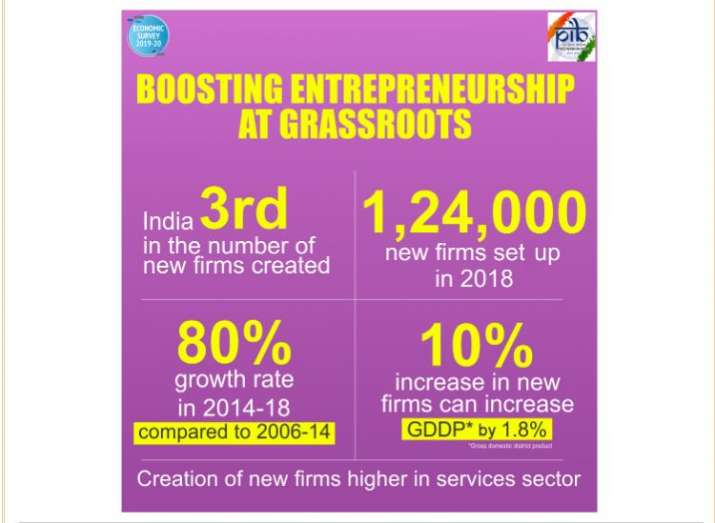 The Survey points out that the level of local education and quality of physical infrastructure in the district influence new firm creation significantly. The grassroots entrepreneurship is not just driven by necessity as a 10 percent increase in registration of new firms in a district yields a 1.8 percent increase in GDDP (Gross District Development Product). Thus, entrepreneurship at the bottom of the administrative pyramid- a district – a significant impact on wealth creation at the grassroots level. This impact of entrepreneurial activity on GDDP is maximal for the manufacturing and services sectors.

The Survey further notes that despite being the 3rd largest ecosystem for entrepreneurship in the world, India appears to have lower rates of formal entrepreneurship on a per-capita basis when compared to other countries.

The Survey points out that relative to entrepreneurial capabilities in manufacturing, Services and Infrastructure, entrepreneurial capabilities in the Agriculture sector seem to be distributed evenly across most districts in India. States in the highest quintile of relative entrepreneurial activity in the Agriculture sector are Manipur, Meghalaya, Madhya Pradesh, Assam, Tripura and Orissa. Establishments in the North-East are more likely to be private enterprises in the food business such as organic produce farms and tea plantations while a majority of the establishments in Madhya Pradesh and Orissa are farmer producer companies, designed as hybrids between cooperative societies and private limited companies that organize farmers into a collective to improve their bargaining strength in markets.

Measures to increase the literacy levels rapidly through the institution of more schools and colleges will spur entrepreneurship and consequently local wealth creation. Thebetter connectivity of villages through tar roads will likely improve access to local markets and improve entrepreneurial activity. The policies that foster ease of doing business and flexible labour regulations foster entrepreneurial activity, especially in the manufacturing sector. As the manufacturing sector has the potential to create the maximum jobs, states must focus on enabling ease of doing business and flexible labour regulations to foster job creation, says the Economic Survey.