BCCI named its 19-man squad for the five-match T20I series against England on Saturday and India TV picks the six takeaways from the announcement.

India defeated Australia in their previous T20I assignment Down Under, last December, yet the newly-appointed selection committee made several changes to the squad on Saturday for the impending five-match contest against England that begins from March 12. Three of IPL 2020's top performers - Suryakumar Yadav, Ishan Kishan, and Rahul Tewatia - have all been added while Bhuvneshwar Kumar, Rishabh Pant, and Axar Patel have been recalled along with Varun Chakravarthy, who had missed the Australia series owing to an injury. Meanwhile, injured Manish Pandey, Sanju Samson, and Mayank Agarwal missed their spots while Jasprit Bumrah has been rested. Ahead of the contest, India TV picks the six takeaways from the squad announcement.

Rishabh Pant is back

It has been more than a year, a large part of which was affected by the pandemic, since Pant last appeared in a T20I game for India. He was benched for the T20I series against New Zealand, which was followed by an underwhelming IPL season in the UAE, where he recorded a strike rate of 116.8, the lowest he managed in any of the five seasons he played, and eventually faced the axe as the selectors opted to go ahead with Sanju Samson as their second wicketkeeper for the format after KL Rahul.

Yet, since 2018, no other Indian have managed to record fewer boundaries per ball while maintaining a strong activity rate (A metric that calculates the ratio of balls a batsman scores off. High value may not suggest a better strike rate, but shows that the batsman can keep the scoreboard ticking) during middle overs (faced at least 300 balls) in IPL where his numbers are 5.462 and 0.706 respectively. He also has the second-highest strike rate, with 151.60, as a middle-order batsman in T20 cricket in the given period after Hardik Pandya's 173.01. 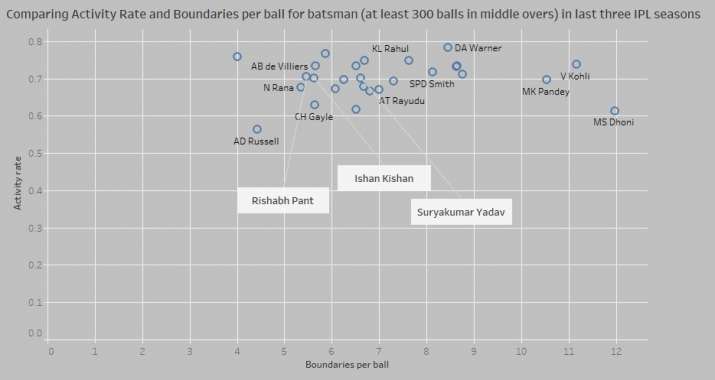 The Mumbai pair of Suryakumar and Ishan have been knocking on the door for quite long, and the selectors have finally opened the door of opportunity for the two in World T20 year, which will be played later this year in India. Ishan and Suryakumar have both played a pivotal role in Mumbai Indians' back-to-back title wins. In middle overs, arguably the toughest phase in a T20 game, the two have scored boundaries every 5.6 and 6.6 balls while having a near similar activity rate of almost 0.7. Only Nitish Rana, Pant and Rohit have recorded a better combination among all.

Chasing a colossal target of 233 is always a herculean task in T20 cricket. Teams would look for stronger starts or better hitters of the ball to work things out in the middle. Keeping the latter aspect in mind, Tewatia was promoted to No.4 during the chase against KXIP and the batsman claimed to have struck sixes at will in the nets, struggled to 17 of 23 amid the asking rate rising to almost 17. Some trolled him, most asked him to sacrifice his wicket as Twitteratis turned analysts, but what followed next was one for the ages. He struck five sixes to kickstart arguably the best T20 heist, ever, as Tewatia escaped from the jaws of humiliation to guide his team to a memorable and record-breaking win, hence epitomising that famous "sunshine" quote from the movie Rocky Balboa. And it wasn't just one. Tewatia, over the course of the season, produced a couple of sich breathtaking strokes while also performing successfully as a leg-spinner. In IPL 2020, Tewatia recorded a death-over scoring rate of 12.23 runs per over, managing boundaries every 3.45 balls.

KL Rahul to not keep wicket?

Ishan and Pant have both been referred to as wicketkeepers in the T20I squad, but not Rahul who has taken over the responsibility since the Australia series at home at the start of 2020. With Sanju Samson being replaced by Ishan, the selectors might be looking to explore more options for the role of wicketkeeper-batsman. Another possibility can be that the selectors are looking to explore more middle-order hitting options and hence adding Rahul to the competition for the opener's slot.

The return of Bhuvneshwar Kumar 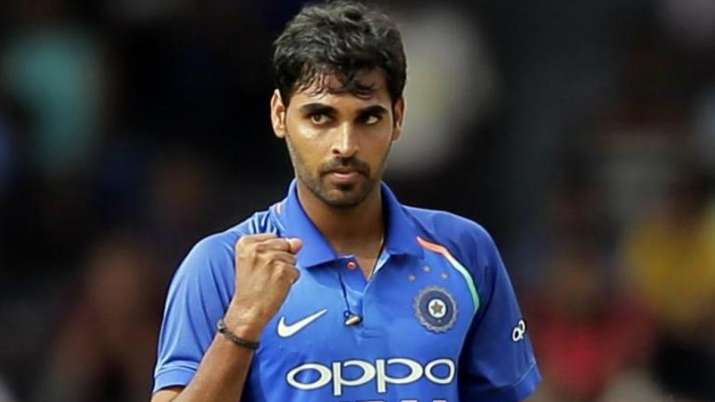 The seamer along with Bumrah was once considered the most lethal bowling pair in limited-overs cricket. But Bhuvneshwar's struggle with prolonged injury has left the management looking for back-ups. But the pacer is back and all set to don the Indian jersey for the first time since his T20I appearance in December 2019. IPL 2020 did start on a promising note for him, but he was soon out with another injury for the remaining season and hence missed the Australia tour as well. But with T20 World Cup in less than a year from now, Bhuvneshwar is back in reckoning having proven his fitness in the Syed Mushtaq Ali Trophy.

With a new set of players given an opportunity for the England series, a happy headache awaits the management given the introduction of little too many options for multiple skillsets. India presently have four players fighting for the opener's role, three for the No.4 spot, four for the wicketkeeper's role, three for an all-rounder spot, five for the role of a spinner, and six for the role of a pacer.