Why India should stick to Prithvi Shaw for Christchurch Test

Prithvi Shaw's technique was under the scanner following his dismissals in Wellington and people have called for replacing him with Shubman Gill in Chirstchurch.

India were battered by New Zealand in the first Test at Wellington by New Zealand and once again, their batting frailties up for scrutiny following batting collapses in each innings. The ones at the receiving end of the criticism have been Prithvi Shaw and to some extent Virat Kohli for his outlandish drive in the first innings, which led to a simple catch at slips. However, while Kohli's place in the side is unquestionable, Shaw's isn't and this is where, the team management has to be very careful with what they do.

Shaw, an U-19 World Cup-winning captain two year's ago and the star debutant later in the year, had a rough 12 months and his return to the international fold wasn't as eventful as it was two summers back but dropping him now would mean a negative and confusing message going out to a youngster, who has his whole career ahead of him and a fair bit under the current regime.

The 20-year-old has come under some criticism for the way he got out in the first Test with his technique drawing some criticism. Shaw looked to flick the ball too early and leaned forward a tad early, thus, allowing the ball to jag back in and in the process, fail to counter the swing and saw his stumps disturbed in the first innings. This was the fourth time he was bowled and mostly in similar circumstances in seven innings. In the second essay, his footwork once again let him down and technique too. He was positioned to play the ball leg side as usual but when the ball angled in, he failed to make the adjustment and in the end, jabbed one in the air to the man behind square on the leg-side, where Tom Latham completed a good diving catch. 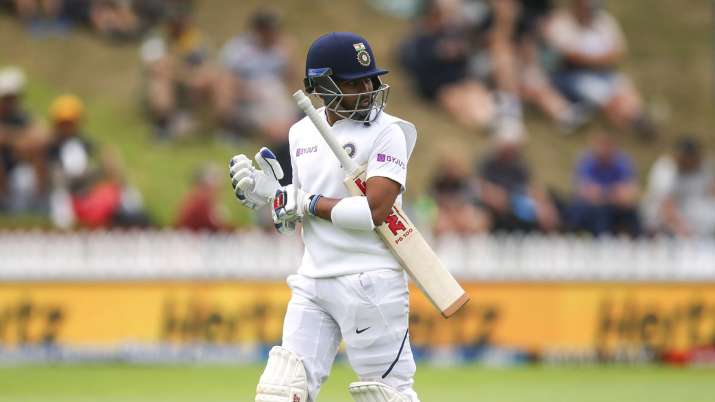 Shaw's frailties have forced people on Twitter to question his ability and even Scott Styris suggested that India should play Shubman Gill in the second Test.

"I am currently, as I have been for a year or two, flying the flag for Shubman Gill. I think he is a special talent who India is leaving out unnecessarily," Scott Styris commented during the Star Sports show.

He even suggested that India can follow suit and let Gill bat at No.6 and allow Hanuma Vihari to open the batting with Mayank Agarwal.

"India and Australia usually bring their new players at no. 6 positions. So India have that option. They can say, ‘Look Prithvi, we know you are young, we’ll come back to you in other conditions'"

“Maybe put Vihari up the top or put Shubman Gill at 6. Or, of course, they can put him straight into the top of the order because that’s where he usually bats," Styris added.

However, despite the calls for the axe, Shaw should be persisted with the team management. Since making his return from an unfortunate ban, Shaw has been in fine form. In New Zealand as well, he has scored a century and a fifty against New Zealand XI and New Zealand 'A' while representing India 'A'. While Shaw's failures have suddenly highlighted his flaws, a drop from the team would break the confidence of a player, who is young and fiery. The Mumbaikar plays an attacking brand of cricket that is not only crowd-pleasing but also gives India a fast start to an innings that they have lacked since the departure of Virender Sehwag and leaving Shaw out now would pop questions in his mind about his style and that's not something you want for a youngster, who is largely being seen as the future of Indian cricket.

While backing Shaw would mean more waiting time for Gill, it would also be right for the players to know that both will have a long rope before being cut off. Gill, who perhaps should have played the first Test itself following his scores of 83, 204* and 136 against New Zealand 'A', would know that when he gets his chance, he will be backed too... something that is of optimum importance for players -- look at Rohit Sharma in the early 2010s.

With India next playing a Test match against Australia in Nov-Dec, both Gill and Shaw might have to wait for a chance to play as Rohit Sharma will be back to partner Mayank Agarwal Down Under and out of the two, only one will get in as the third opener but giving Shaw the one extra opportunity in New Zealand would mean, the team management did their bit to walk the talk with Shaw before leaving him out if he fails in Hagley Oval as well.

Till then, Shubman can wait.