In just six overs in the opening session of the first Test under the cloudy skies in Wellington, the 6'8" fast bowler made a dream start to his Test career with wickets of both Cheteshwar Pujara and Indian skipper Virat Kohli

Kyle Jamieson wouldn't have found his name on the playing XI hadn't Neil Wagner taken paternity leave to be with his wife. And in just six overs in the opening session of the first Test under the cloudy skies in Wellington, the 6'8" fast bowler made a dream start to his Test career with wickets of both Cheteshwar Pujara and Indian skipper Virat Kohli. The wickets implied, India huffed and puffed there way to 79 for three at lunch at the windy Basin Reserve.

Not walking away from what the statistics reveal about toss calls in New Zealand, Kane Williamson invited India to bat first on the green top and milk quick wickets. Prithvi Shaw, who was chosen ahead of Shubman Gill for the opener's spot alongside Mayank Agarwal, looked to put early pressure on the New Zealand new-ball pair, but Tim Southee eventually found the right length to get the ball click of the bail on the off stump as the youngster walked back on 16. The angling in position urged Shaw to look for the leg-side defence showing no footwork in his execution, but the ball swung away past the bat and rattled against the off stump. Meanwhile, Trent Boult, who was playing his first game since the Australia series, failed to get the ball swinging around the off stump and looked to find a rhythm. Pujara and Mayank struggled through the first hour, cautiously negating the swing and bounce to take India to the drinks break at the loss of just one wicket.

India, especially Pujara, had already gotten a glimpse of Jamieson's ability in his first over before the hour mark. A fuller ball, angled in from around the stumps as Pujara stood in a position to defend the ball, but it took a fraction of a turn to whiz past the outside edge. Pujara reckoned his stay was out and looked back with a wry smile. He left the next two balls - fuller and outside off - to hand Jamieson with a maiden-over start.

Jamieson kept troubling both the batters with the extra bounce he managed to extract off the green track. For Pujara, he hammered him with the short ball length before managing to get bounce of that same old good length ball which was angled into the batsman and straightened enough to take the outside edge as BJ Watling completed the formalities behind the stump. Pujara did nothing wrong on his behalf, and looked solid in his defense.

Jamieson had a separate plan reserved for the Indian skipper. He kept mixing the length between short and full early on - the short balls were to push him on his backfoot before getting in that sucker ball. The welcome delivery was declared wide by the umpire before Kohli decided to let go of the next two bouncers that followed. In the next over, Kohli got on his knee to drive the full and wide ball to cover before ducking the shorter delivery that followed. Jamieson then got another fuller delivery against the Indian skipper, but this time on the middle stump as Kohli drove it to long-on. And followed it with a steep bouncer. 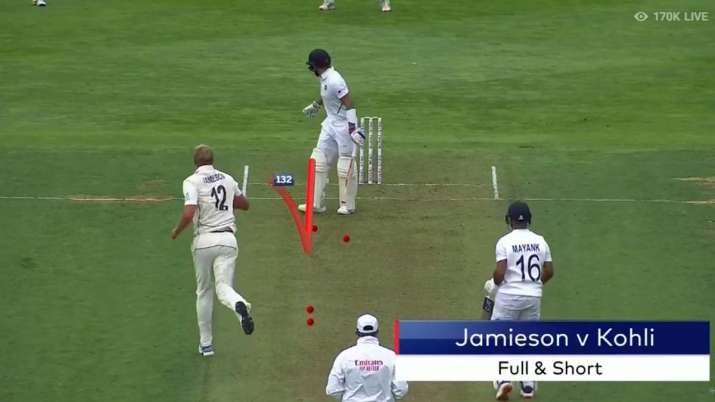 Jamieson changed back his length, slightly full and outside off that dragged Kohli out for a cover drive, but the bounce off the track got the batsman to edge it to Ross Taylor at slip.

Kohli walked back for just two runs, his lowest score against New Zealand. The score also extended his century-less streak to 19 innings, his worst since 2014 when he hit a hundred after 24 innings.