CWC meeting held on Monday discussed future leadership of the party after a section of leaders demanded "collective" leadership and another reposing faith in the Gandhi family. During the day-long proceedings, Congress leaders requested Sonia Gandhi to continue as party chief for next 6 months.

The Congress Working Committee (CWC) meeting held on Monday discussed future leadership of the party after a section of leaders demanded "collective" leadership and another reposing faith in the Gandhi family. During the day-long proceedings, Congress leaders requested Sonia Gandhi to continue as party chief at least for the next 6 months until AICC elections are held.

"The CWC notes that internal party issues cannot be deliberated through the media or public fora. CWC urges and advises all concerned to raise such issues only in party fora," KC Venugopal, Congress Working Committee.

"There is freedom to express views but discussion should be held on party forum, not in public domain, members expressed concerns over it," Sonia Gandhi said at CWC adding everyone is family and has to strengthen party together.

"Members expressed faith in Sonia Gandhi and Rahul Gandhi and urged her to continue leading party, she agreed. Next meeting to be called soon, probably within 6 months, to elect the new chief. Till then, Sonia Gandhi agreed to remain interim president."

Madam (Sonia Gandhi) has to continue and the election will take place as soon as possible which is the unanimous decision of the working committee: Congress leader and CWC (Congress Working Committee) member, KH Muniyappa

There is no different opinion on leadership and even Ghulam Nabi Azad ji, Mukul Wasnik ji and Anand Sharma ji have given in writing that there is no dispute on leadership: Congress leader and CWC (Congress Working Committee) member, KH Muniyappa

"Sonia Gandhi to remain Congress party's interim president for now, new chief to be elected within the next 6 months," Sources after Congress Working Committee (CWC) meeting concluded after 7 hours.

05:16 pm: Action can be taken against those who wrote letter to Sonia Gandhi if...: Ambika Soni

In CWC, Ambika Soni said as per party constitution, action can be taken against those who wrote to Sonia Gandhi on party leadership. GN Azad, Anand Sharma said they were within limits in raising concerns, still, if someone feels it's a breach of discipline then action can be taken.

Leaders who wrote to Sonia Gandhi over party leadership said in CWC, "There were some concerns for the betterment of the organisation, wrote letter to convey those. Have full faith in the leadership of Sonia Gandhi and Rahul Gandhi."

What I said was, yesterday some Congress person had said that we did it at behest of BJP and in that context I said, "It is most unfortunate that some colleagues (outside CWC) have accused us of collusion with BJP, and if those people can prove this allegation, I will resign".

"A section of media is wrongly attributing that, in CWC I told Rahul Gandhi to prove that the letter written by us is in collusion with BJP. "Let me make it very clear that Rahul Gandhi has neither in CWC nor outside said that this letter was written at the behest of BJP."

04:08 pm: How long will they remain slave of Congress: Owaisi taunts Ghulam Azad

Ghulam Nabi Azad used to call us BJP's 'B' team. Now, his party's former chief said he colluded with BJP by signing on the letter. Muslim leaders in Congress, who are wasting time, should think for how long they'll remain the slave of Congress leadership," AIMIM chief Asaduddin Owaisi said.

03: 50 pm: Rahul Gandhi never said it, neither in CWC or outside: Ghulam Nabi Azad

Rahul Gandhi never said it, neither in CWC or outside, that this letter (to Sonia Gandhi about party leadership) was written in collusion with BJP, Ghulam Nabi Azad, Congress said.

"Gandhi-Nehru family's existence is in crisis, their political dominance is over, Congress is finished.. so who stays in what position hardly matters now... Congress should return to Gandhi, the real 'swadeshi' Gandhi without any foreign element," says BJP leader Uma Bharti.

02:00 pm: Former Congress social media chief Divya Spandana, responding to Kapil Sibal’s tweet, said, “I think Rahul ji made a mistake. He should have said colluding with the BJP & the media.”

01:35 pm: "Rahul Gandhi hasn't said a word of this nature nor alluded to it": Randeep Singh Surjewala to Kapil Sibbal

Suspended Congress leader Sanjay Jha took to Twitter after Rahul Gandhi accused dissenters of colluding with the BJP.  Rahul Gandhi had lashed out at the leaders who had written to Sonia Gandhi.

"Rahul Gandhi says “ we are colluding with BJP “

Defending party in Manipur to bring down BJP Govt.

12:15 pm: Rahul Gandhi criticises leaders for going public with issues concerning party, says it is CWC and not media where we discuss

Rahul Gandhi questions timing of letter by 23 Congress leaders to Sonia Gandhi when the party was fighting in Rajasthan and Madhya Pradesh and when Sonia Gandhi was ill.

12:00 pm: Sonia Gandhi hands over letter to KC Venugopal replying to note sent by dissidents, contents of which were read out: PTI quoting sources

11:44 am: Sonia Gandhi has asked CWC to look for a non-Gandhi chief, say sources.

11:34 am: Sonia Gandhi offers to resign as party chief

Sonia Gandhi reiterated her decision and asked the party to begin deliberations to set in place a process to find her replacement. 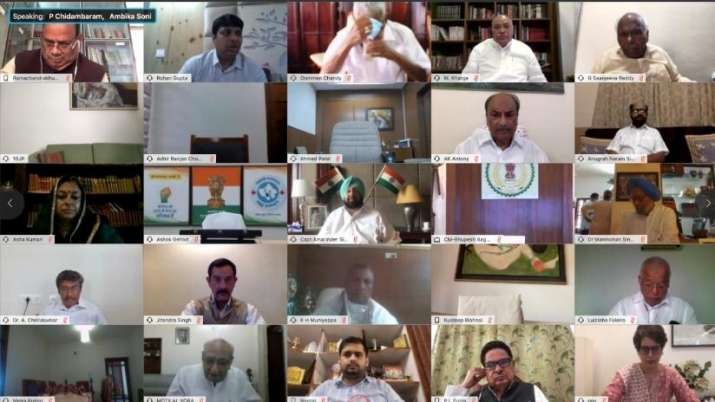 10:45 am: The CWC meeting comes in the backdrop of letters written by 23 Congress leaders including Kapil Sibal, Shashi Tharoor, Ghulam Nabi Azad, Prithviraj Chavan, Vivek Tankha and Anand Sharma calling for 'full time' active leadership, sweeping reforms and raising questions about the party's condition and direction, as well as demanding the election of the CWC. The leaders have also demanded "collective leadership" in the party.

09:40 am: Most Congress workers would like to see Rahul Gandhi as party chief: Sachin Pilot

09: 36 am: Maharashtra Congress leaders passed a resolution on Sunday, stating that Sonia Gandhi to continue as party chief.

09:00 am: Chhattisgarh Chief Minister Bhupesh Baghel on Sunday wrote a letter to Rahul Gandhi, urging him to return as the president of the party. Goa Congress unit also backed Gandhi family.

Sections of the party feel that the uncertainty over the leadership issue should end soon as it will help the party take on the BJP-led government more forcefully. There has been a clamour within a section of Congressmen for Rahul Gandhi to take over as the president of the grand old party again.

Constitution of the central parliamentary board (with party chief and 9 others) to decide on organisational matters and policies. All permanent and special invitees to the CWC have been invited to the meeting, where the leadership issue is also likely to be discussed, besides the current political situation in the country.

What letter by top 23 partymen says,

Appointment of full-time and effective leadership active in field and available at national and PCC headquarters.

Elections at all levels in a transparent manner, including for CWC

Need to unite opposition, rally parties headed by those who left Congress

Sonia likely to insist on resigning at today's CWC meeting

Demand for Rahul Gandhi to take over likely to be raised in the meeting. However, he is unlikely to accept it.

Sonia could stay on, but on the condition that a letter is chosen within a limited time frame. Proposal for 2-4 vice-presidents/ working presidents doing rounds.