The resort, currently closed for the summer, is on the wealthy barrier island of Palm Beach. No activity could be seen there Friday afternoon and the Trump Organization did not return a call seeking comment.

President Donald Trump’s prized Mar-a-Lago resort in Florida could be directly in the path of Hurricane Dorian , which is forecast to become an extremely destructive storm.

The National Hurricane Center’s most recent track for Dorian places Mar-a-Lago in the crosshairs of a possible Category 4 storm with winds of almost 140 mph (225 kph). The center’s forecasters warn the hurricane poses a menace to millions, particularly along Florida’s heavily populated eastern coast, though they say some of the more reliable computer models are predicting a turn northward that would have Dorian hug the coast, delivering a glancing blow to the state.

The resort, currently closed for the summer, is on the wealthy barrier island of Palm Beach. No activity could be seen there Friday afternoon and the Trump Organization did not return a call seeking comment. 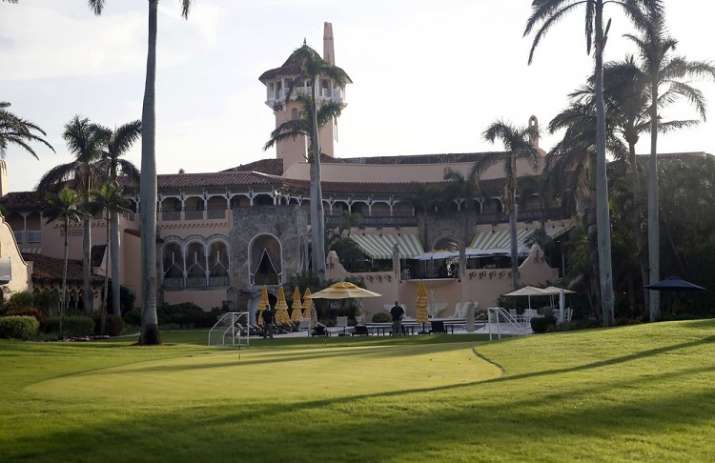 On Friday, Trump was asked how concerned he was about the hurricane threat to his resort and responded: “Well, you know I haven’t even thought about until the question was just broached a little while ago. Yeah, it would look like Mar-a-Lago is dead center but look Mar-a-Lago can handle itself. That’s a very powerful place.”

He added: “The thing I’m worried about is the state of Florida because ... this could be a record-setting hurricane. Now maybe things change. We’re hoping for one element that might happen and that’s that it makes a right turn and goes up north just prior to or equal to hitting shore. That would be great, but that’s a pretty small percentage at this point.”

Mar-a-Lago, which dates from the 1920s, was built by cereal heiress Marjorie Merriweather Post, with the main mansion containing 126 rooms. Trump bought the place in 1985, after efforts to make it into a national park didn’t work out.

During the cooler months, Trump visits the property frequently and has held several high-level meetings there with world leaders, such as Japanese prime minister Shinzo Abe and China’s Xi Jinping.

Hurricanes have always been a part of Mar-a-Lago.

In 2005, Trump said he received a $17 million insurance payment for hurricane damage to the resort, but an Associated Press investigation found little evidence of such large-scale damage.

At the time, Trump said he didn’t know how much had been spent on repairs, but acknowledged he pocketed some of the money. He transferred funds into his personal accounts, saying that under the terms of his policy “you didn’t have to reinvest it.”

“Landscaping, roofing, walls, painting, leaks, artwork in the — you know, the great tapestries, tiles, Spanish tiles, the beach, the erosion,” he said of the storm damage. “It’s still not what it was.”

Trump is a climate change skeptic whose policies have infuriated many environmentalists. Separately, when Dorian appeared headed to Puerto Rico he tweeted the American island is “one of the most corrupt places on earth. Their political system is broken and their politicians are either Incompetent or Corrupt.”

Those sentiments led many Trump critics to publicly hope the storm steers toward Mar-a-Lago — although that would also mean disaster for nearby middle-class and low-income neighborhoods.

“I’m rooting for a direct hit on Mar a Lago!” former Canadian Prime Minister Kim Campbell tweeted Wednesday. Campbell, who served as prime minister for four months in 1993, later dialed that back, tweeting, “I know Palm Beach well and am sorry if it gets a big hit.” Still, she said she hoped Dorian would “shake up Trump’s climate change denial.”

Eric Trump, the president’s son, replied Friday to Campbell on Twitter: “Our family is rooting for the safety of millions of homes, businesses, families and wonderful people in a great State of Florida.”

Meanwhile, local governments across Florida, including in Palm Beach County, are gearing up to deal with rising sea levels and possibly more intense hurricanes. If sea-level rise predictions even at the lower end come to pass, Mar-a-Lago could have ocean water lapping on its lawns in the not-too-distant future.