Preparations for Ram Mandir Bhoomi Pujan at Lord Ram's birthplace in Ayodhya is in full swing with Yogi Adityanath-led Uttar Pradesh government leaving no stone unturned to make the grand occasion a huge success. The Uttar Pradesh Chief Minister today penned an emotional article calling the Bhoomi Pujan will bring an end to the 500-year-old long struggle and wait of devotees.

"We are truly fortunate that Lord Shri Ram has given us the opportunity that people have been waiting for. So many generations who fought for this day over the years are no more with us. This is a very emotional moment," Yogi wrote in his article in Hindi. Meanwhile, his top officers from the government were in Ayodhya to ensure everything went according to the plan.

Prime Minister Narendra Modi, who along with several senior BJP leaders had championed the cause for the construction of Ram Mandir, is expected to attend the 'Bhoomi Pujan' ceremony along with priests, saints and other distinguished guests. LK Advani and RSS Chief Mohan Bhagwat is also in the guestlist for Bhoomi Pujan ceremony. Considering the coronavirus situation, only 200 people will participate in the ceremony to be held on August 5.

Senior UP govt officers, including chief secretary RK Tiwari, ACS Home Avnish Awasthi, ADJ Law and Order Prashant Kumar, will be in Ayodhya today to oversee the preparations. Ayodhya, a temple town, on the bank of River Saryu holds a sacred place in the hearts of millions of Hindus across the globe. 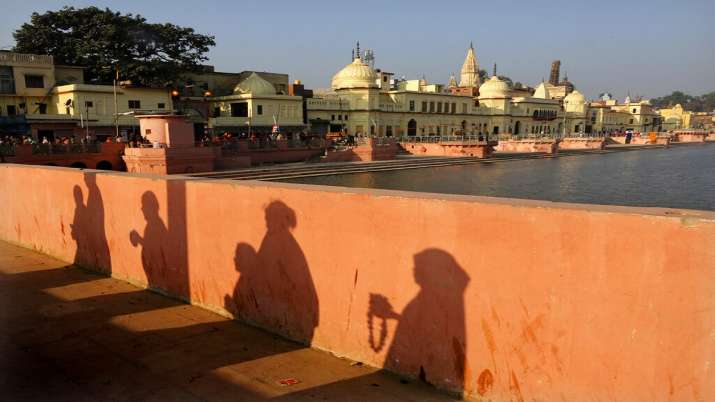 Normally a quiet town with narrow bylanes and ancient walls is today bustling with workers and staffs from the administration. According to Hindu scriptures, Lord Ram was born in Ayodhya to King Dashratha. It was here that Maryada Purushottam Ram returned after defeating Ravana, the symbol of evil. Hindus across the globe celebrate Diwali to mark Lord Ram's return to Ayodhya. A victory of good over evil. 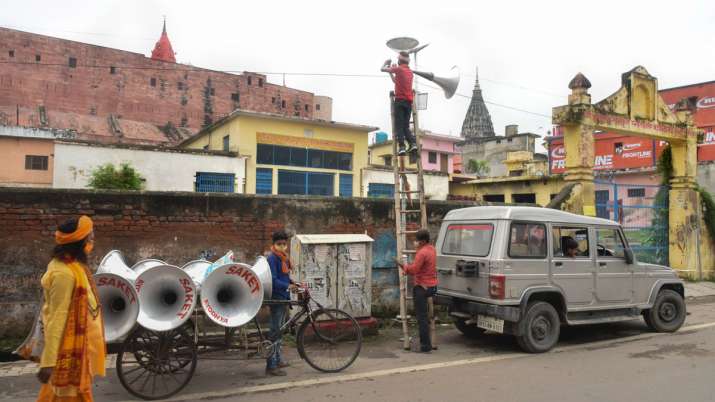 UP govt has planned a massive infrastructure face-lift of the town, which is expected to become a major pilgrim centre.

Mahant Kanhaiya Das, president of Ayodhya Sant Samiti, said that Diwali will be celebrated in Ayodhya from August 3, while bhajans and other religious activities will also be performed. Saints will also participate in 108 Sundar Kand and Hanuman Chalisa recitations in the temples.

The foundation laying ceremony for the Ram temple at Ayodhya will be telecast live on state-owned public service broadcaster Doordarshan.

Tune into India TV to watch Ram Mandir Bhoomi Pujan on August 5. To get live streaming of the Bhoomi Pujan, you can switch to India TV Live TV or India TV Youtube LIVE.

Holy water and soil brought in from Mahakal temple, Rameswaram and other places.

For 'Bhoomi Pujan' of the Ram temple, the Shri Ram Janmabhoomi Teertha Kshetra Trust has decided to invite more Ayodhya saints for the event. Also, the soil and holy ash from the popular Mahakaleshwar temple in Madhya Pradesh's Ujjain and water from the Kshipra river has been sent to Ayodhya. Also, soil was collected from the holy "Agni Theertham" sea in Rameswaram have been sent to Ayodhya which will be used in the construction of the Ram temple.

The construction of the long-awaited temple is set to commence with the groundbreaking ceremony after the Supreme Court in a unanimous verdict cleared the way for it at the disputed site in Ayodhya, and directed the Centre to allot a 5-acre plot to the Sunni Waqf Board for building a mosque.

Houses and buildings on the main streets from Tedhi Bazar to Naya Ghat in Ayodhya, where the convoy of Prime Minister Narendra Modi will pass on August 5, are being painted yellow for the 'Bhoomi Pujan' ceremony of the Ram temple construction.

Mayor of Ayodhya Rishikesh Upadhyay, said: "All houses and buildings on main streets of Ayodhya are being painted yellow. Sweets for all embassies to mark Bhoomi Pujan

The Shri Ram Janmabhoomi Teerth Kshetra Trust will be sending boxes of Bikaneri laddoos to all foreign embassies in Delhi to mark the Bhumi Pujan ceremony of the grand Ram temple in Ayodhya.

The laddoos will also be distributed in the temple town. According to the officials of the Trust, orders have been placed for 4 lakh packets of laddoos.

Celebrations in Bihar's Sitamarhi too

Bihar's Sitamarhi, considered Sita's birthplace, is also all decked up for the Ram Mandir Bhoomi Pujan celebrations. The town will hoist 2100 saffron flags with Bhajan and Kirtans (religious prayers) planned through the entire town.

Also Read: Ayodhya to get massive makeover in run-up to Ram Mandir ceremony. All you need to know