Bigg Boss 13 fame Asim Riaz and Himanshi Khurana were in news for being approached for the dance reality show Nach Baliye 10. The two even featured in Neha Kakkar's love song Kalla Sohna Nai and became one of the most adored couples of the town.

The latest season of Salman Khan's reality show Bigg Boss 13 gave us one of the most adored couples-- Asim Riaz and Punjabi singer Himanshi Khurana. The two confessed their love for each during the last few days of the show and ever since they have been giving us some major couple goals. After the show got over the duo even made their appearance in Neha Kakkar's love song Kalla Sohna Nai that made fans call them an aww-adorable couple. Not only this, but their social media PDA has also made everyone hooked to their social media. It was being said that the duo has been approached for dance reality show Nach Baliye 10 and now Asim’s ladylove has spilled the beans on the same.

Talking about being approached for the dance show, Himanshi in a recent Zoom interview said, "Talks are going on but I can't say anything now. So, talks are definitely on but I don't know (what will happen) as we're in lockdown now. We don't know exactly when things will go on the floors.

Well, it would be some good news for all AsiManshi fans if this comes out to be true!

Himanshi was in a 9-year-old relationship with an NRI guy Chow when she entered Bigg Boss 13. It was Asim first who fell in love with her and expressed her feelings later which she got evicted. It was Himanshi's second visit in the show where she revealed about her broken engagement and it is then when cupid struck both of them. Asim even proposed her and was asked by Salman to take care of her as she is his responsibility now.

Meanwhile, the two were in limelight recently when Himanshi shared a photo with her diamond ring on social media which made everyone left wondering if the two of them are now engaged and if Asim has popped the question. 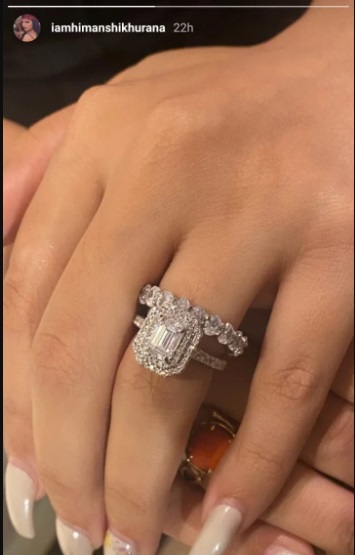 Check out their love-filled posts here:

Himanshi before making a second entry into Bigg Boss 13 hinted fans about being in love with Asim through her song Ohdi Shreaam. Check it out: