Priyanka Chopra set the mood retro and looked ‘bold and beautiful’ when she made an appearance at the biggest music night of the year the 62nd Grammy Awards. Her Rulph & Russo gown made a bold statement.

Priyanka Chopra looked ‘bold and beautiful’ when she made an appearance at the biggest music night of the year the 62nd Grammy Awards. The actress graced the red carpet in a Ralph and Russo ensemble with super plunging and navel-baring neckline. Yeah, that deep! She was accompanied by her husband -- American singer Nick Jonas. Priyanka has earlier also hit the right fashion note with her pre-Grammy 2020 look.

The white Ralph and Russo dress had batwing sleeves with attached fringes which gave it the needed dramatic touch for the grand event. The actress complimented the look with side parted straight hair and drop earrings. Nick Jonas wore a crisp brown suit.

Priyanka also paid tribute to basketball legend Kobe Bryant, the news of whose death came just a few hours ahead of Grammys 2020. The actress flaunted his jersey number ‘24’ on her nails, and dedicated a long post to him: 'Kobe Bryant was my first real introduction to the NBA. I was 13 living in Queens NYC, the same age as his sweet little girl, Gianna. He ignited my love for the sport, competition, and striving for excellence. He inspired an entire generation. His legacy is so much bigger than basketball. This heartbreaking accident also took the life of his young daughter, Gianna. I’m shook and so saddened. My heart goes out to Vanessa, Natalia, Bianka, and Capri Bryant. You are in my thoughts. Also sending my condolences to the loved ones of the other family and pilot in the accident. Being at tonight’s Grammys ceremony in his home at the Staples Center is going to be surreal.” 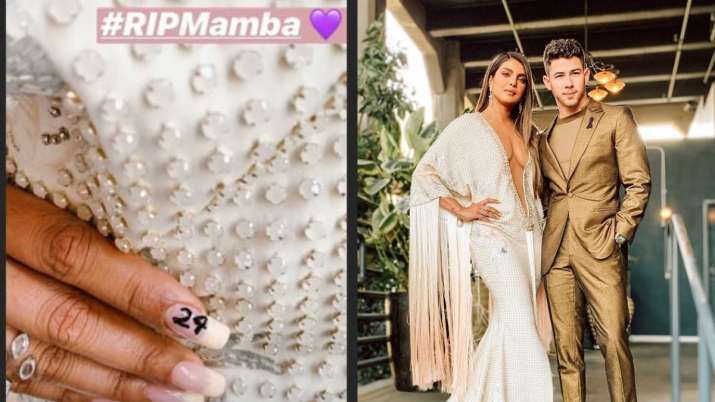 The couple walked the red carpet with Joe Jonas and Sophie Turner, and Kevin and Danielle Jonas.

So proud of this fam. Congratulations @jonasbrothers you guys crushed it today. #grammys