It so happened that Kartik Aaryan dropped a funny question on a picture of former "Bigg Boss 13" contestant Shehnaaz Gill.

Shehnaaz took to Instagram, where she shared a selfie, which currently has 633K likes on the photo-sharing website.

As the caption, she wrote: "Respect everyone." 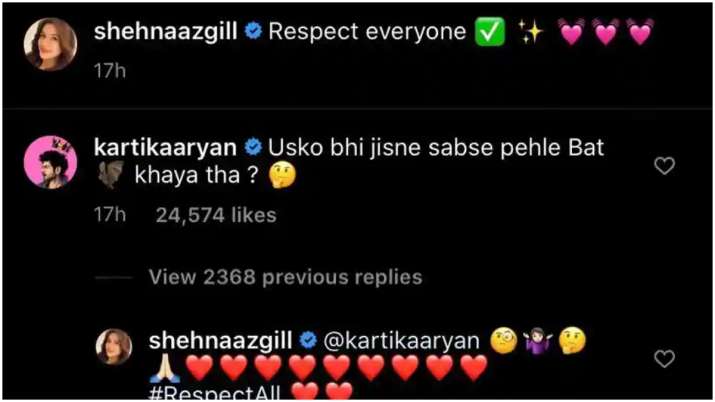 On the work front, Kartik was last seen in Imtiaz Ali's "Love Aaj Kal" alongside Sara Ali Khan. He currently has two films in his kitty -- "Dostana 2" and "Bhool Bhulaiyaa 2".

Shehnaaz, featured in the song "Bhula dunga" along with TV star Sidharth Shukla in March.

Sung by Darshan Raval, the song's video showcases the chemistry between Sidharth and Shehnaaz, who made a lot of headlines with their close bond in the "Bigg Boss 13" house.

In May, she featured in a lyrical video "Keh gayi sorry" by Jassie Gill.