A decade of dominance: Big 3 continue to be too much for Gen-X

Roger Federer, Rafael Nadal and Novak Djokovic once again dominated the world of tennis with Andy Murray breaking it for a brief while in 2016.

Every year started with a new hope for the Zverev's and the Thiem's now and Del Potro's and Tsong's then but as the decade turns, it's the same old story. Rafael Nadal, Roger Federer and Novak Djokovic are again too much to handle and once again, they remain on top of the rankings and podium. In 2019, some people thought it might change but as the year comes to an end, Rafa is on top of the world after winning two Grand Slams and Nole has won the other two. The only consolation much like last year... Dominic Thiem winning the ATP Finals compared to Alex Zverev in 2018.

Nadal, Federer and Djokovic have shown no signs of stopping. This year Russia's Daniil Medvedev had a dream run and almost everything he touched, turned to gold but still, he wasn't good enough to win a major trophy. The year ends with Nadal on top of the pile followed by Djokovic and then Federer... the 15th straight year when one of the top 4 (top 3 now) ended the year as No.1.

TOP OF THE WORLD

All of their exploits however have not come in this decade. While much of Federer's dominance was in the previous one, Djokovic and Nadal have managed to edge out the Swiss in this one. Federer topped the charts on four occasions with his biggest run at the top coming in between  July 2009 to June 2010 (48 weeks) -- post that, the longest he was on top was for 17 weeks in 2012. Djokovic, on the other hand, has been No.1 for four occasions as well but from July 7, 2014 to November 6, 2016 -- he remained on top -- 122 weeks. The most by any player at a stretch in this decade. Rafa has been the No.1 on most occasions with the number being 7 and the longest reign being for 56 weeks from June 7, 2010 to July 3, 2011. Andy Murray broke the domination in the middle by winning two Wimbledon's in 2013 and 2016, thus, providing some challenge and being on top for 41 weeks between November 7, 2016 to August 20, 2017 -- the only time when either of the 'Big 3' didn't end a year on top. 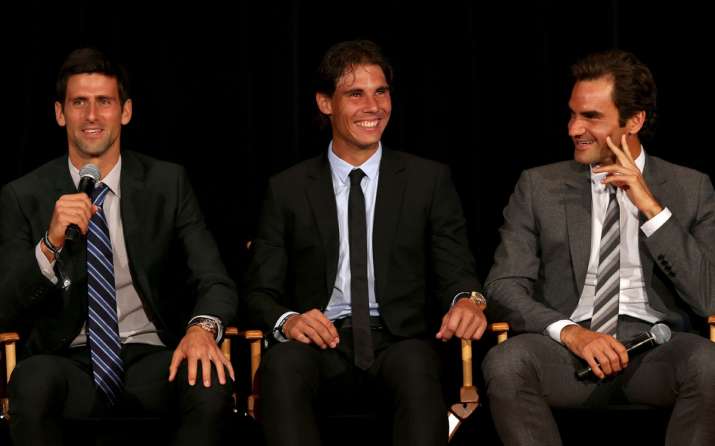 Between them, Djokovic has won 7 Australian Open titles, Federer has 8 Wimbledon titles and 5 US Open titles (tied), and Nadal has 12 French Open titles. Overall, Federer has won 103 singles career titles (second in Open Era behind Connors's 109), out of which 20 have been Grand Slams and five have come in this decade. Nadal is second with 84 and Djokovic is third among the three with 77. The Spaniard has won 13 Grand Slams in this decade out of his 19. He also remains the undisputed king of Roland Garros since 2010, winning it 9 times. Djokovic on his part has 16 Grand Slams with 15 of them coming in this decade.

2019 with much promise from Medvedev when he almost pushed Rafa to the end in the Australian Open semi-finals but in the end lost to him and once again, it was a Djokovic-Nadal final which Djoker eventually won. In French Open, Thiem shined bright but fell at the final hurdle to Rafa. Wimbledon this year produced one of the greatest finals of all time between Federer and Djokovic, which the Serb somehow managed to win despite being two match points down. And, in US Open, Medvedev, who was in the form of his life played a sensational match but once again fell short as Rafa won the five-setter.

2020 promises to be no different but signs of wear and tear has shown in Federer's game and perhaps if anyone has to bow out among the three, it is likely to be the Swiss. At 38, he isn't getting any younger and there have been signs of fatigue but he vows to carry on and go out on his terms. With Rafa and Djoker, however, things are different. They have looked stronger than ever. Rafa has had some injury concerns but he is set to be back in Melbourne after a break while Djokovic gets ready to defend his crown at the Rod Laver Arena.

However, the start of the decade could be a start of a new story of Medvedev carries on his form in 2020 and Thiem and Alex Zverev play to their full potential. They have shown their capabilities but have lacked consistency. Stefanos Tsitsipas is another player who impressed this year while Roberto Bautista Agut, Kei Nishikori and Fabio Fognini continue to be on the fringes.

The coming decade will surely be not dominated by the trio but the last decade and a half belonged to the three men and perhaps no sport ever has seen or will see such mastery ever for such a long time.