Deepika Kumari may finally taste Olympic success with husband Atanu Das ready to be the calming factor in the mixed event debut at the Oympics.

If you are an ardent follower of the quadrennial mega sporting event Olympics, you are probably aware of Deepika Kumari and her infamous struggles at the Games. Entering as World No.1 recurve archer in her maiden 2012 London Olympics the buzz was high around her.

After all, she also won her first World Cup individual gold medal few weeks ago in Turkey prior to the Olympics. However, the archer only yeilded an opening round exit to her familiar British rival Amy Oliver. She did better her performance four years later in Rio with a round of 16 exit -- including a women's team seventh-placed finish -- but a lopside loss left fans disappointed while her Olympic jitters were quite evident.

Olympic-bound Chirag on spectre of COVID-19, loss of loved one & Tokyo dreams

Now in 2021, when Deepika is on her way to Olympics again as the World No. 1 -- after two indiviudal World Cup gold medals in Guatemala and France -- meant expectations are high of the 27-year-old girl yet again.

However, no matter how morale-boosting the recent performances have been, the medals might have actually created a false sense of confidence. Many big names from powerhouses like South Korea, USA and other European nations were missing at these events; expectedly to keep themselves safe from COVID-19 outbreak ahead of the Olympics.

Her adversary would be star Korean archer Kang Chae Young -- nicknamed The Destroyer -- who went on a gold medal-winning spree at the World  Cup stages and is the reigning world champion. The likes of Chinese Taipei's Tan Ya-Ting, Germany's Lisa Unruh among others will be a handful to deal with as well.

While a 64-archer individual event may pose a bigger challenge for any athlete, many archers are rubbing their palm on an Olympic medal with the newly-introduced mixed team events, which will see just 16 pairs in action. This effectively means, a string of four wins can fetch you a gold medal and one less could still mean a silver or a bronze.

And with other nations yet to figure out the best way to head into this format, Deepika clearly has an added advantage with her husband and long-time training partner Atanu Das, who is also the best men's recurve archer in the country, as her significant other. To those unaware, Deepika got married last year during the pandemic after courting for years.

Archery Association of India (AAI) general secretary Pramod Chandurkar feels that both the archers are having previous Olympics experiences under their belt and having that understanding as cohabitees adds another dimension to their peformances.

"The chances of medal feels stronger than ever this time around. Of course they have this understanding as husband and wife and also Atanu has been that morale support to Deepika but let's not forget they both are much more than that. They have been picked because they both are best archers in the country and our strongest claim for the medal," Chandurkar told Indiatvnews.com

Keeping aside their respective gold medals at the Paris World Cup, the duo also prevailed three-time Olympic medallist Brady Ellison (USA) and defending champions Sjef Van Den Berg and Gaby Schloesser (Holland) on their way to grab the gold in the mixed-team event; serving as an apt dress rehearsal ahead of the event.

Despite the brighter prospect in the mixed event, it will be wrong to write her off in the individual event as her ranking stands for something. The same applies for Atanu in the men's individual and team category. The 29-year-old Kolkatan did make the right kind of noise with a gold at the Guatemala World Cup Stage 1 but with tougher competition at the World Cup Stage 3 in Paris, his performance was left wanting with a 23-placed finish.

Some expectations are there from men's team as well, where Atanu will be combining with Indian army archers Tarundeep Rai and Praveen Jadhav, especially after the form they showed two years ago with a silver medal at the World Championship. However, unsatisfactory displays at the recent World Cups -- 8th-place in France after finishing 5th in Guatemala -- have dwindled the hopes. 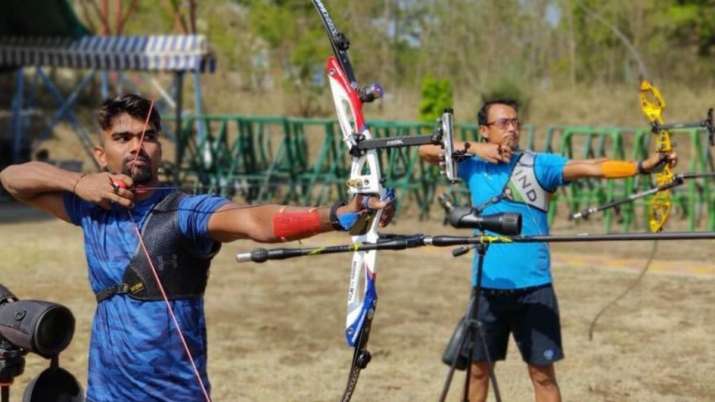 Saying that, surprise result could be in order especially if we glance at the sacrifices the archers have made for the mega event.

37-year-old Tarundeep has years of international archery experience under him and told us earlier in an interview this would be his last Olympics before he quits the sport. The Manipur archer took the tough call of staying away from his family for months to focus on his preparations for Olympics at the Army Sports Institute in Pune.

Pravin, on the other hand, is gearing up for the Olympics and could be the surprise package, says AAI official.

"Pravin is heading into his first Olympics and seems to have a strong mental toughness. He is someone who doesn't speak much and prefers keeping to himself while being focussed on his performance. Athletes like him have often prospered at the big stage," said Pramod.