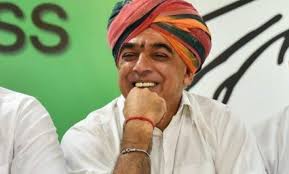 Manvendra Singh, son of former Union Minister Jaswant Singh, contested Rajasthan Assembly election 2018, from Jhalrapatan seat against Chief Minister Vasundhara Raje on Congress ticket but lost. Singh, 54, quit the BJP in September 2018 and joined the Congress in October after being sidelined within the ruling party, reportedly because of Raje's feud with his father Jaswant Singh, who was denied a BJP ticket in the last Lok Sabha polls. Manvendra Singh was the member of the 14th Lok Sabha of India from 2004-2009 representing the Barmer-Jaisalmer constituency of Rajasthan. Manvendra Singh, who is a Colonel in the Territorial Army, has studied at an MA degree from Mayo College. He has also studied at Hampshire College, Amherst, Massachusetts and the School of Oriental and African Studies, London.

Rajasthan Polls: Cong fielded Manvendra against me as it couldn't find any other candidate, says CM