Yeh Rishta Kya Kehlata Hai actress Mohena Kumari Singh lost her cool when an Instagram user questioned her veil in the wedding picture. Actually, Mohena shared a photo from her royal wedding that took place in Haridwar in October, 2019. The photo shows Mohena with her family and husband Suyesh Rawat. The bride is in a red Sabyasachi lehenga with her face covered in ghoonghat or veil.

She shared the photo along with New Year's wishes for her followers. ''Wish you all a Happy New Year from the Rewa and Rawat Family with a message to spread Love , Peace , feeling of Unity , Happiness and good health to the World and our Country. #fromustoyou,'' she wrote.

Her photo was loved by her fans but an Instagram user went on to ask the reason behind her veil. "Why is your face under veil?" the comment read.

Well, Mohena had no issues with that. But, she lost her calm when a troll responded to the question with the comment (now deleted) that read: "Because these are people who follow their so called male dominated rituals. Even education doesn't get them a brain."

This made Mohena give a sassy reply. "Even Christians have a veil when they marry...and so do Muslims... I guess they are all uneducated too. It's an age old Rajput tradition which Rajput women follow when they get married,'' she wrote. 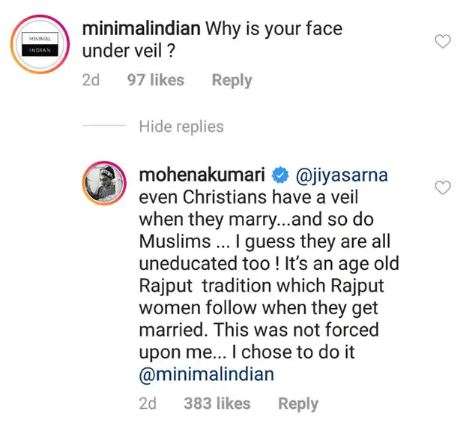 Mohena went on to add that the custom was not forced on her. She chose to follow it. Her befitting reply was widely appreciated on social media.

She later clarified her first comment after some raised objection. The actress wrote, "I said that just like Rajputs, Christians and Muslims also wear veils... so why are they calling us Rajputs uneducated just because we like to follow a few things that are part of our culture." 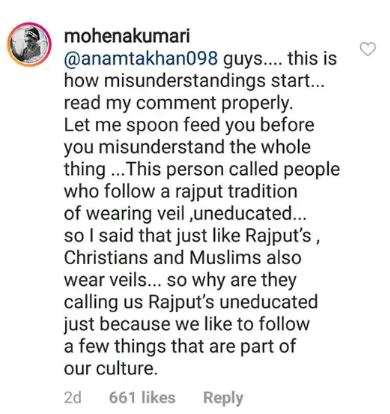 For the unversed, Mohena is the princess from Rewa's erstwhile royal family. She has worked in TV shows like Yeh Rishta Kya Kehlata Hai and appeared on Dance India Dance and Jhalak Dikhhla Jaa.