Bipasha Basu shared a picture with Dino Morea in an Instagram story and wished him on his birthday.

Bipasha Basu and Dino Morea were one of the hottest couples of Bollywood back in the days. However, things didn’t fall in place and the couple decided to part their ways and move forward in life, but this didn’t stop them from being good friends. Dino and Bipasha buried the hatch and respected each other's life and never behave like sour exes. Dino who turned 44 today got a special birthday wish from Bipasha Basu who shared a picture with Dino on her Instagram story. 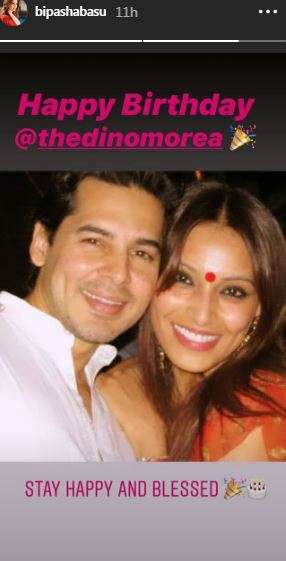 The duo often is seen celebrating each other's happiness. Earlier Dino also had shared his birthday wishes for Bipasha on her birthday. He shared a picture wish Bipasha and wrote, "Happiest birthday @bipashabasu wish you loads of love & happiness."

Dino and Bipasha who started their career at the same time began dating in 1996 and stayed together for almost 6 years before parting ways in 2002. The ex-couple had featured in films like Raaz,  Gunaah and continued to work together in films despite their breakup. They were in seen in shq Hai Tumse (2004) Rakht (2004) and Chehraa (2005), post their break-up.

On the work front, Bipasha will soon be making her comeback with the film Aadat Diaries. Bipasha will be seen on silver screening after a gap of 4 years, she was last seen in Bhushan Patel's Alone (2015), in which she was paired opposite her husband Karan Singh Grover.