India conquer Australian shores after 71 years: Relive all of India's victories outside sub-continent

This was India's first series win in Australia in 71 years and 12 attempts overall.

India have won the most number of series against West Indies outside the sub-continent (4 times) while the least against Australia (once).

India's 2-1 victory over Australia in the four-match series was the first time the visitors triumphed over the Aussies Down Under in a Test series ever.

Not India's fault that Steve Smith and David Warner were not picked: Sunil Gavaskar

'This is as big as 1983 WC triumph': Shastri on India's historic Test series win in Australia

Pandya, Rahul pick MS Dhoni over Virat Kohli as the 'better captain' on Koffee with Karan

India vs Australia: 5 key takeaways from a historic series triumph

It took India 71 years and 12 attempts to achieve the feat and it was also India's 11th Test series win outside the subcontinent.

With a Test series victory Down Under, done and dusted, the only place that remains to be conquered in whites is South Africa, where they have lost in each of their past seven attempts.

All of India's other Test victories outside the subcontinent have come against West Indies (4 times), England (3 times) and New Zealand (2 times) and Zimbabwe (once).

Virat Kohli's men lived up to the expectation in Australia this time around and grabbed a reeling Australian team at the scruff off their necks and the hosts never looked capable enough to beat the visitors.

The Indian team buried the demons of the past and handled the Australian pace attack pretty well compared to the past. With Cheteshwar Pujara and Virat Kohli leading from the front, India put on some good scores on the board and were ably backed by the pacers, who have done exceedingly well for them in the past year and a half.

After the third Test, Jasprit Bumrah, Mohammed Shami and Ishant Sharma became the most successful pace trio in a calendar year with a total of 131 wickets in 2018. Bumrah took 46 wickets in 9 Tests while Shami also returned with 46 wickets in the same year from 12 matches. Ishant took 39 wickets from 11 Tests last year.

It was the pacers who scripted India's win Down Under and despite the absence of Steve Smith and David Warner, the win Down Under will enhance India's position as the No.1 Test side in the world.

Here are all the other instances when India won a Test series outside the subcontinent.

India won the first Test in Dunedin but lost the second at Christchurch but went on to win the third and fourth at Wellington and Auckland to win their first series outside the subcontinent.

Pataudi's team defeated the hosts by five wickets in the first Test but lost the second by six wickets. India then went on to win the third Test by eight wickets and fourth Test by 272 runs.

India only won a single Test in a five-match series to win in West Indies for the first time.

Ajit Wadekar led India to an impressive win over the Caribbean nation.

India won the second Test seven wickets at Port of Spain while the rest of the games at Kingston, Georgetown, Bridgetown and Port of Spain ended in draws.

India beat England for the first time in England when they returned home with a 1-0 series win in a three-match series.

India drew the first two Tests at Lord's and Manchester and then went on to win the third game at The Oval by four wickets to script a historic series win under Wadekar.

India's next series win outside the sub-continent came after 15 years and it was again in England.

In between, India lost two series in 1979 and 1982 to England away but came back stronger in their next tour.

India won the three-match series 2-0 under Kapil Dev's captaincy. The visitors won the first Test at Lord's by five wickets while the second Test ended in a 279-run win at Leeds in favour of the visitors. The third game ended in a draw at Birmingham.

India took 19 years to win a Test series outside the sub-continent again. This came after a loss in the one-off game in 1998-99 as well.

India played two Tests and defeated the hosts in both of them with Sourav Ganguly at the helm. India won the first game at Bulawayo by an innings and 90 runs and then won the next game by 10 wickets ti complete the whitewash.

India defeated the hosts 1-0 in the four-match series under Rahul Dravid.

The visitors drew the first three Tests at St. John's, Gros Islet and Basseterre but won the last Test at Kingston to take the four-match series 1-0.

India went to England and put on some gutsy performances and won the second game at Nottingham while the first and third games at Lord's and Oval were drawn.

It was under Dravid's captaincy that India won a series in England after 21 years and after that, the team has failed to do so again so far. 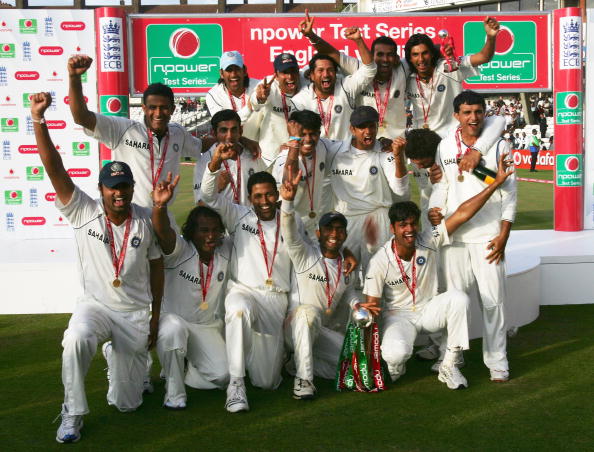 India won the first Test by 10 wickets in Hamilton while the second Test in Napier ended in a draw after Gautam Gambhir's 137 off 436 balls. He stayed at the crease for 643 minutes to defy the hosts.

The last game at Wellington also was a draw and India returned home with a 1-0 win in the three-match series in challenging conditions. 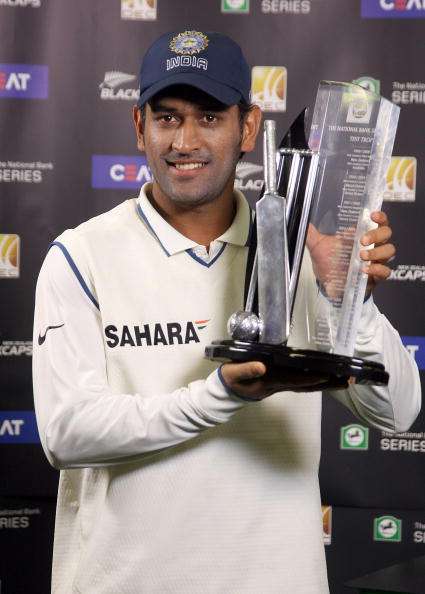 India beat West Indies 1-0 in the three-match series to maintain their dominance on the Caribbean turf.

India won the first Test at Kingston by 63 runs under the captaincy of Mahendra Singh Dhoni and drew the next two games at Bridgetown and Roseau.

This was Virat Kohli's first series victory outside the subcontinent as captain and that set the tone for the rest of his reign.

India won the first match at North Sound by an innings and 92 runs while the second at Kingston was drawn. India came back hard in the third Test to win it by 237 runs and drew the last one at Port of Spain to take the series 2-0.