Champagne in the English summer of 83': Kapil's Devils become the toast of the nation

India caused a major upset in world cricket when they defeated a West Indies side that had won the two previous editions and featured Viv Richards, Clive Lloyd and Desmond Haynes.

June 25, 1983: A day which revolutionised Indian cricket, a moment which is forever etched in the history of the game, arguably, a valiant tale of the underdogs standing tall. Standing at the balcony at the iconic Lord's, a Kapil Dev-led side presented India with it's maiden World Cup triumph, a moment which is still reverberated.

India caused a major upset in world cricket when they defeated a West Indies side that had won the two previous editions and featured Viv Richards, Clive Lloyd and Desmond Haynes.

Having successfully negotiated the group stage, in which teams played each other twice, India made short work of England in the semi-finals with a six-wicket victory at Old Trafford.

The West Indies were even more impressive, though, in limiting Pakistan to 184 before cruising past the victory target for the loss of just two wickets at The Oval.

Richards scored 80 runs from a 96-ball knock, while Malcolm Marshall led the bowling with 3/28.

The performances seemed to leave little room for doubt about the final, and even less after India could only reach 183 runs after losing the toss. Leading the attack, Andy Roberts (3/32), Marshall (2/24), Michael Holding (2/26) and Larry Gomes (2/49) left India reeling. Sunil Gavaskar was removed by Roberts for 2. Kirti Azad was dismissed for a duck. The Indian batsmen faltered against an attack which at the time was revered and feared.

But who knew that the Indians would go out with all guns blazing and things started to go wrong for the all-conquering West Indies after Haynes' dismissal left his team on 50/2. Two catches by Kapil Dev, one featuring a memorable 20-meter dash, removed Richards and Lloyd, as Mohinder Amarnath (3/12) and Madan Lal (3/31) ripped through the West Indies batting order.

The 20-meter dash catch to dismiss Vivian Richards was the defining moment for India. Sprinting to take a catch as well was Yashpal Sharma. Madan Lal recalls the moment when both players were running to take a catch when he started yelling, “Yash, rukh, rukh! You don’t go for the catch.”

The Windies were all out for 140 with eight overs to spare in what was a stunning result, and a defining moment, for Indian cricket. Revolutionizing the sport, India gradually built their way, but it took 28 years long years before an MS Dhoni-led Team India brought the World Cup home. 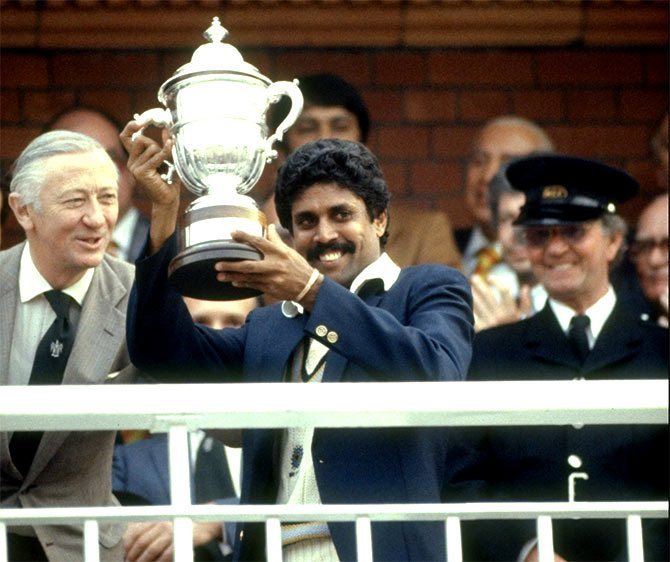 Kapil Dev shared an interesting story which was recently revealed. A moment which defined him as a captain, a leader and a warrior.

"I carried a bottle of champagne in my bag when I went to the ground to play the final. Not really (on having full confidence of the eventual result). What I can recall is that I had the belief that we can win the Cup. I was the captain and if the captain does not have confidence then how will he inject the same into the other members of the team? I told myself even if we lose, we still can celebrate the moment of reaching the final," Kapil told Times of India.

Fast forward to 2019, another World Cup in sight, a 15-member balanced squad, a fearless captain in Virat Kohli, the Men in Blue are ready to bring the World Cup home.