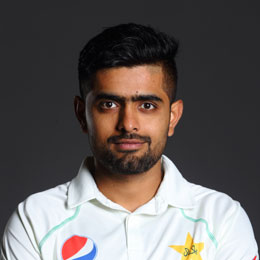 Born in Lahore Babar Azam is the first cousin of Akmal brothers. He is considered as the next big thing in or Pakistan cricket because of discipline and control temperament. He is the fastest to score 1000 runs in T20I cricket that show how good he is for the shorter format of the game. After scoring runs in domestic cricket Babar got the national team call-up in 2015 against Zimbabwe but his career got new heights when he scores back to back three centuries against West Indies in ODI series which led to his Test cricket debut. He is often compared to Indian `Run Machine` Virat Kohli but Babar regards him as a senior cricketer always.

Babar Azam is very close to being in same league as Virat Kohli, Steve Smith: Misbah-ul-Haq

No one knows better than us what it is to play without crowd: Babar Azam

We are different from each other: Babar Azam reacts to comparisons with Virat Kohli