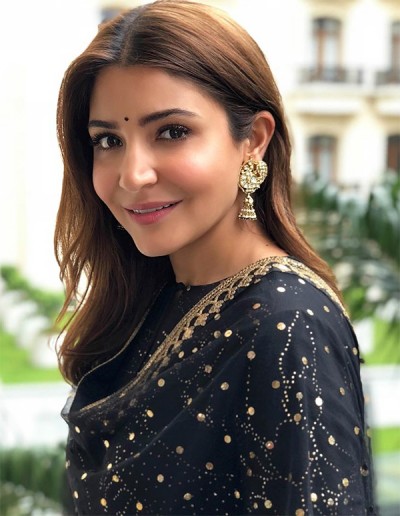 Anushka Sharma is an Indian actress and film producer. She has established a career in Hindi films, and is one of the most popular and highest-paid actresses in India.

Bollywood actress Anushka Sharma who recently welcomed her first child, a baby girl with husband Virat Kohli on Tuesday took to her Instagram and poured in a heartfelt birthday wish for actress Tripti Dimri.

Virat Kohli, Anushka Sharma have no servants at home, they serve food to everyone: Sarandeep Singh

Former India cricketer and national selector Sarandeep Singh recently made some interesting revelations about the superstar couple. He disclosed that Virat Kohli and Anushka Sharma who live in Mumbai don't have any servants at home and prefer to serve their guests themselves.

Bollywood actor Anushka Sharma joined other celebrities in praying for those affected by the Uttarakhand glacier burst by expressing her condolences for the families of the victims on social media.

Anushka Sharma's latest picture was a mirror selfie in which the actress can be seen pouting and wearing her current favourite accessory which happens to be none other than a 'burp cloth' of her daugter Vamika. She was seen wearing a black T-shirt and leggings with a white and grey burp cloth.

Anushka Sharma begins waste segregation practice at sets, says 'it can make a world of difference'

Setting an example for her fellow celebrities, the actor-turned Anushka Sharma has begun the practice of waste segregation on the sets of the projects greenlit by her production house Clean Slate Filmz. The new mom is the first producer to begin this practice at her sets to take a step towards environment conservation.

Bollywood actress Anushka Sharma shared the first picture of her newborn baby girl on Monday. As soon as the actress posted the picture on her social media handle, she was bombarded with wishes. While what caught our attention was Anushka Sharma's American doppelganger Julia Michaels comment.

'My whole world in one frame': Virat Kohli on picture with wife Anushka and daughter Vamika

Virat Kohli had a heartwarming reaction to his picture with wife Anushka Sharma and baby Vamika.

Virat Kohli and Anushka Sharma have named their daughter 'Vamika', and the latter took to Instagram to share the first picture of the baby.

Kareena Kapoor Khan who is expecting her second child with actor husband Saif Ali Khan shared a picture doing yoga in the post. Not only this, but more pictures showed her indulging in some stretching in her final months of pregnancy. Before Bebo, it was Anushka Sharma who shared pictures of herself performing the Shirshasana with hubby Virat Kohli's help.

Varun Dhawan married the love of his life, Natasha Dalal, on Sunday evening in a private ceremony at Alibaug. While Varun most friends like Deepika Padukone, Anushka Sharma, Shraddha Kapoor could not join in the celebrations personally, they took to social media and blessed the couple.

In a disturbing incident, a wild elephant lost its life after two people in the Nilgiri district of Tamil Nadu threw a burning tyre on it. Celebrities like Kamal Haasan, Randeep Hooda, Koena Mitra, Pranita Subhash and others took to Twitter to express their anger over the incident.

Ever since the birth of power couple Anushka Sharma and Virat Kohli's daughter on January 11, people have been waiting for a glimpse of the couple. The duo gave a pleasant surprise to fans as they were spotted together in Bandra on Thursday.

Bollywood actress Anushka Sharma is not only a proud mother, but also a proud wife after his cricketer-husband Virat Kohli changed his Twitter bio to 'A proud husband and father' after the birth of their baby girl.

Virat Kohli and Anushka Sharma on Wednesday released a statement to the paparazzi teams in Mumbai, requesting privacy and not to photograph their daughter. Along with the media statement, the couple also sent out personalized gifts to the paparazzi.

Fans, Friends, and family everyone is pouring in wishes to the new parents and the baby girl. But one post that won everyone's heart is by Amul India. Amul came up with one of the most creative ways to wish the couple.

Anushka Sharma, Virat Kohli appeal to paparazzi to not click their daughter's picture

Actor-producer Anushka Sharma and her cricketer-husband Virat Kohli on Wednesday urged paparazzi to not click photos of their newborn daughter.

Soon after Virat Kohli and Anushka Sharma became parents, their fans went crazy on the internet and started trending their names along with wishes. Not only this, but many shared anonymous pictures and even names for the little baby. From Virushka to Anvira, there were all sort of suggestions for the couple. If you are one of those who is still missing out on the amazing time Netizens had on Twitter yesterday, here we are!

Virat Kohli took to his social media handle and shared a post about Anushka Sharma and their daughter's well-being. Not only this, but he even requested fans and followers to respect their privacy. Soon, a picture of a baby's feet started going viral on the internet and everyone termed it as the first pic of baby Virushka. The same was shared by none other than Virat's elder brother, Vikas Kohli along with a beautiful welcoming message for the angel.

Virat Kohli and Anushka Sharma were blessed with a baby girl on Monday. As soon as the news of their baby spread, there were many who started wondering when Priyanka Chopra and Nick Jonas would announce the good news. Well, here's what PeeCee said.