Haryana is headed for a hung assembly with no party appearing in a position to cross the halfway mark in the 90-member house. However, the road is clear for the Bharatiya Janata Party (BJP) in Maharashtra as the BJP-Shiv Sena alliance has enough numbers to form government in the state.

The BJP-Shiv Sena coalition was Thursday on course to retain power albeit with a reduced majority in Maharashtra where the opposition Congress-NCP alliance put up a good show. However, the real surprise came from Haryana where beating almost all poll projections the voters did not vote for one single party. The BJP-ruled Haryana appeared headed for a hung assembly with JJP chief Dushyant Chautala emerging as the kingmaker.

In the first Assembly elections after the BJP's triumph in the Lok Sabha polls in May, the BJP's electoral juggernaut met with some resistance in Maharashtra and Haryana with a resurgent Congress performing creditably in the northern state. The Bharatiya Janata Party(BJP) was set to emerge as the single largest party in Haryana followed by the Congress. 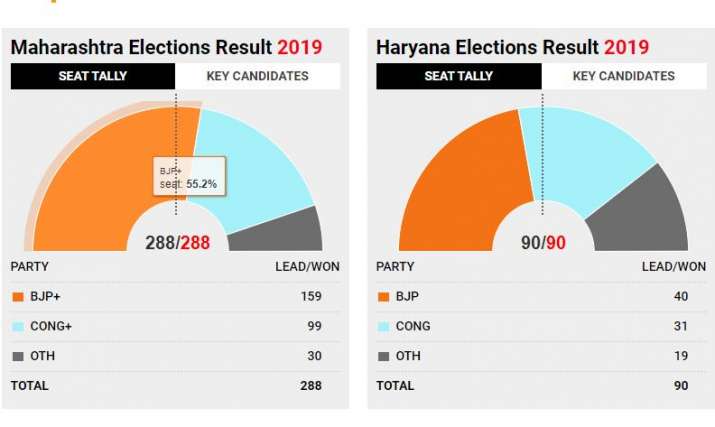 (India TV numbers at the time of writing this report )

The Sharad Pawar-led Nationalist Congress Party(NCP) not only improved its performance in Maharashtra but fared even better than senior partner Congress by contesting lesser number of seats.

As per the results and trends available in Maharashtra, the BJP's tally in the 288-member Assembly was 99 while it was 57 for the Sena. In the 2014 polls, the BJP and the Sena won 122 and 63 seats respectively. They had then contested separately. The Sena joined the Fadnavis-led government over a month after it was formed.

NCP won or was ahead in 55 while the Congress' tally was 44. The NCP and the Congress bagged 41 and 42 seats in the outgoing house. After the results, Sharad Pawar told reporters that the message was that people did not like "the arrogance of power".

In a presser, Uddhav Thackeray indicated he would drive a hard bargain in talks with the ally BJP during government formation. The Shiv Sena chief said it was time to implement "fifty-fifty" formula for power-sharing. While the two parties can form the government comfortably, the BJP fell short of its target of reaching near the half-way mark on its own, giving more leverage to the Sena.

"Maharashtra mandate is an eye-opener for many," Thackeray told reporters in Mumbai. "We had agreed to contest fewer seats (than the BJP), but I cannot accommodate the BJP every time. I should allow my party to grow," Uddhav said, indicating that he would drive a hard bargain.

In a separate press conference, Maharashtra Chief Minister Devendra Fadnavis thanked the people of Maharashtra for giving a "clear and decisive mandate" to the BJP-led NDA. Fadnavis said the BJP and Shiv Sena will go by what was "pre-decided" between them on sharing of power. Fadnavis expressed shock at the defeat of party candidates Udayanraje Bhosale in the Satara Lok Sabha bypoll and minister Pankaja Munde in Parli assembly seat. 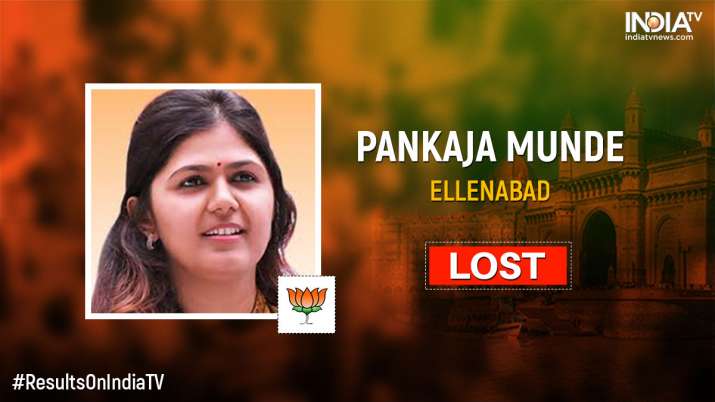 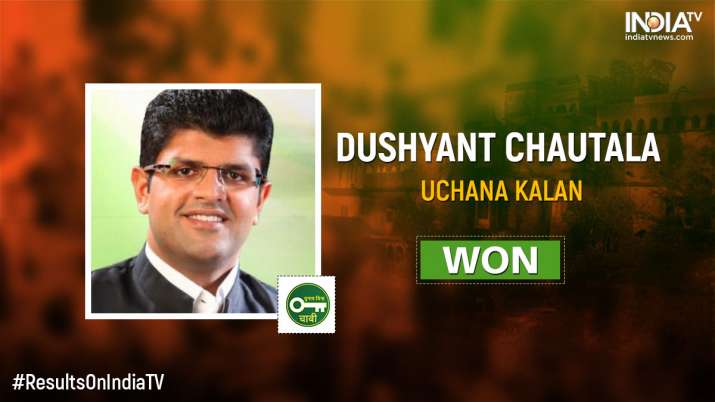 Haryana emerged a cliffhanger with no party either the BJP or Congress touching the halfway-mark. The Bharatiya Janata Party, however, is the single largest party. Manohar Lal Khattar will meet Governor and stake claim to form a BJP government in Haryana.

The outcome of the Assembly polls held on October 21 is a setback for the BJP, which had won 47 seats in the last state elections in 2014. The party had been expressing confidence about raising its tally beyond 75 this time, using the nationalist pitch of abolition of Article 370 in Jammu and Kashmir and the Balakot air strike. The results and the trends come as a shocker for the saffron party, particularly since it had won all the 10 seats in the Lok Sabha elections held just five months back.

The BJP had formed the government in Haryana for the first time in 2014, when it improved its tally from 4 in the previous elections. The Congress, on the other hand, improved its performance substantially in this Assembly elections as it had managed only 15 seats the last time and had failed to open its account in the April-May Lok Sabha elections.