1st Test: We were the better team collectively and deserved to win, says Virat Kohli

Virat Kohli lauded his team for their 'collective' show and said that India deserved to win the Test match in Adelaide.

Virat Kohli lauded his men after a thrilling 31-run victory over Australia at the Adelaide Oval on Monday.

The Indian bowlers had to hold on to their nerves as the Aussie tailenders continued to frustrate the visitors with long and gritty stands but in the end, they ran out of patience as Josh Hazlewood nicked one to KL Rahul in the slips to end their resistance and lose the game.

WATCH: Virat Kohli breaks into a jig on field amidst frustrating rain breaks

We would be the 'worst blokes in the world' if we celebrated like Kohli: Langer

Watch Pant's cheeky banter against Cummins: 'It is not easy, someone is not saying'

With the win, India took a 1-0 lead in the four-match series and also managed to win the first Test of a series in Australia for the first time ever.

And captain Kohli was all praise for his bowlers, who chipped in equally to win the game for the visitors.

"Super proud (of the bowlers), to have four bowlers and take 20 wickets is a great achievement. Something that we haven't done in the past. Shows us that if the batsmen step up regularly, we will be gunning for a win in every Test match.

"Collectively we were the better team and deserved to win," Kohli said.

The last three wickets put on 104 among themselves with Pat Cummins and Mitchell Starc hitting 28 runs each and Nathan Lyon remaining not out on 38 before Hazlewood fell for a 43-ball 13 to hand India the win.

But Kohli feels these things happen in cricket and it is okay to hold on to your nerves and be calm.

"These things happen in Tests, ups and downs through a game. You need to just stay calm. Odds were stacked against them. They fought really well but we executed our plans well and got that last wicket which were intending to get," said Kohli.

"I wouldn't say I was cool as ice but you just don't try to show it. Jasprit was getting worked up in his last over but I just told him to relax," he added when he was asked if he was cool. 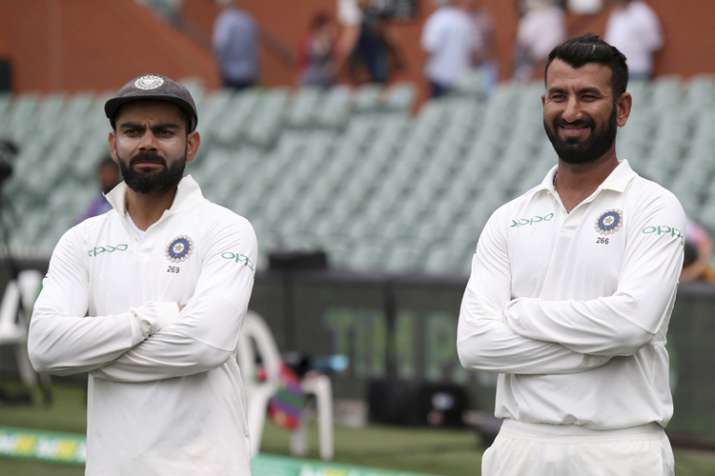 The 30-year-old also heaped praise on Cheteshwar Pujara, who was adjudged the man-of-the-match for scoring 194 runs in the match.

"Priceless from Pujara, we were down and out at lunch on day 1. His grit and determination brought us back in it. We always knew that runs on the board would make the home side tentative. Any lead was gold and we got 15. In the second innings again, he and Rahane batted well," Kohli said.

However, the Indian captain was aware of the shortcomings in the game and said that they need to address before the second Test in Perth.

"I think our lower middle order and lower order could have done better. We could have added another 30-35 runs more which could have taken the game totally beyond Australia.

"So these are things that we have to think about going to Perth but if someone had told me before the series that I would be 1-0 up as soon we started the series, I would have taken it with both hands," Kohli said before signing off.

The next Test starts on Thursday at the Perth Stadium in Perth.