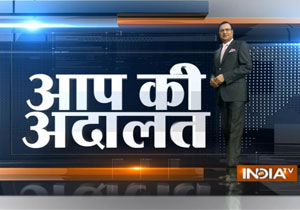 Hosted by Mr. Rajat Sharma, Aap Ki Adalat is India’s longest-running and by far the strongest running show on Indian television. The eventful journey of the show began in 1993 and is still going strong, attracting millions of viewers.

Aap Ki Adalat has seen personalities ranging from Top Politicians, Bollywood Stars to Sportsmen and Spiritual Gurus being grilled on the small screen by Rajat Sharma in his own inimitable way. These prominent faces have poured out all sorts of emotions – some tried to browbeat, some defended their acts and some even shed tears!

A regular weekend feature on India TV, the show has consistently ruled television ratings for more than twenty years now. The truly unforgettable interview of Mr. Narendra Modi, just before the 2014 General elections, broke all rating records of TV news viewership. Attracting eye balls of 74 per cent of Hindi news television viewers in India is a feat never heard or seen before.