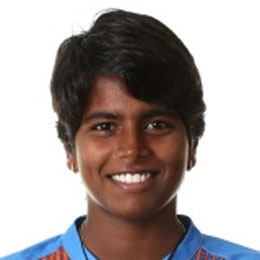 With no Jhulan Goswami in the camp, Arundhati Reddy also can be an impactful player for the women-in-blue. Having made her debut for the India Women in the 2018 five-match series in Sri Lanka, which the visitors won 4-0, Reddy played all five matches. She managed to claim four wickets in five matches and proved expensive with an economy of 8.20.