She has the charisma of her grandmother Indira Gandhi and the charm of her father Rajiv Gandhi. From the time she came into active politics in January, there was a buzz that she will contest in the ongoing polls, from Varanasi.

Priyanka Gandhi, with all her charisma, became the All India Congress Committee General Secretary in-charge of Eastern Uttar Pradesh for Lok Sabha elections 2019. Priyanka, the more popular of the two Gandhi siblings, is reputed for her ability to connect with people in a way that no one does. Brother Rahul, for sure, cannot.


Priyanka is indeed, Congress Party's last hope and as they rightly say, brahmastra. Priyanka's foray in Uttar Pradesh got a lot of attention from political watchdogs and media alike. Her sense of political understanding can be seen from her moves in UP. Right from her Naav yatra, that connected holy cities of Allahabad (which has a strong legacy of Nehru-Gandhi family) and Varanasi (PM Modi’s seat), she managed to establish connection with common people. And we all remember how she had set the narrative of 2019 Lok Sabha polls for the Congress party in her maiden speech in Gujarat, the home turf of PM Narendra Modi.

Will contest from Varanasi if party wished: Priyanka Gandhi 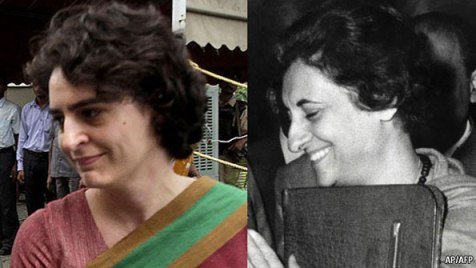 Coming back to our question - why Priyanka Gandhi is not contesting despite being the last hope of Congress party. But had she contested and won, she would have eclipsed her brother Rahul Gandhi, who the party is carrying for the last 10 years in the hope of turning around the party's fortunes. Priyanka's win would have ended all political aspirations of Rahul Gandhi, who doesn't have a solid electoral understanding or the connect.

She has the charisma of her grandmother Indira Gandhi and the charm of her father Rajiv Gandhi. From the time she came into active politics in January, there was a buzz that she will contest in the ongoing polls, from Varanasi. However, the latest news coming in confirms that Priyanka Gandhi is not contesting elections, instead Congress Party gave the ticket to Ajay Rai. But is it a surprise? No. We knew it all along. She wouldn't contest.

Priyanka is a great speaker, has the aura and an appeal of a leader. But with the decision of not fielding Priyanka in Varanasi, Congress has wasted the opportunity. Though not many would be surprised at the moment.