40 detained over violent protest in Delhi's Daryaganj; 42, including 8 cops, injured

According to the police, the protesters set ablaze a private car parked at Subhash Marg, Daryaganj. The fire was immediately doused with water and fire extinguishers. The Delhi Police resorted to lathicharge and used water cannon to disperse protesters as violence marked a march

The Delhi Police detained 40 people in connection with a violent protest in Daryaganj here on Friday, officials said.

According to the police, the protesters set ablaze a private car parked at Subhash Marg, Daryaganj. The fire was immediately doused with water and fire extinguishers.

The Delhi Police resorted to lathicharge and used water cannon to disperse protesters as violence marked a march against the Citizenship (Amendment) Act on Friday with stones being hurled on security personnel.

"Hours after the violent protest near Delhi Gate, around 42 injured people, including eight policemen, got medical treatment at Lok Nayak Hospital. Two people admitted to the hospital have been seriously injured but their condition is not life-threatening at present. One person who has suffered a fracture in his leg is admitted in a ward," Dr Kishore Singh, MS, Lok Nayak Hospital told PTI

"On Friday afternoon, a large number of people gathered in the area of Jama Masjid for prayers. After the prayers, they wanted to proceed towards Jantar Mantar, but police persuaded them not to march towards Jantar Mantar, as the capacity of Jantar Mantar is meant for gatherings below 1,000 and also as no prior permission had been granted," a senior police officer said.

The protesters heeded to police advice and dispersed from Jama Masjid, but later assembled at Delhi Gate.

In the evening, some anti-social elements in the gathering started breaking the barricades and indulged in stone-pelting in a bid to march towards Jantar Mantar against the police advice. Police used water cannon and absolutely minimum force to push them back, police said.

However, the fire was immediately doused with water and fire extinguishers.

A total of 58 companies of security force personnel were brought in from outside to bolster the strength of local police.

There were large gatherings also in the areas of Seelampur, Shastri Park, Jamia Nagar and Shaheen Bagh. Senior officers, with the help of prominent locals of the respective areas, constantly persuaded them and they were dispersed peacefully, the officer said.

Here is how the protest unfolded in real-time:

8:14 pm: Delhi Police PRO, MS Randhawa on protest at Jama Masjid said: "Protest going on since morning was peaceful. Around 6.30 pm, some outsiders came here&started pelting stones. We used water cannon. People were pushed back. Some policemen received injuries. Some people have been detained."

6: 25 pm: Heavy security deployed in Daryaganj area due to the ongoing protest

6: 13 pm: Protestors set a vehicle on fire in Daryaganj 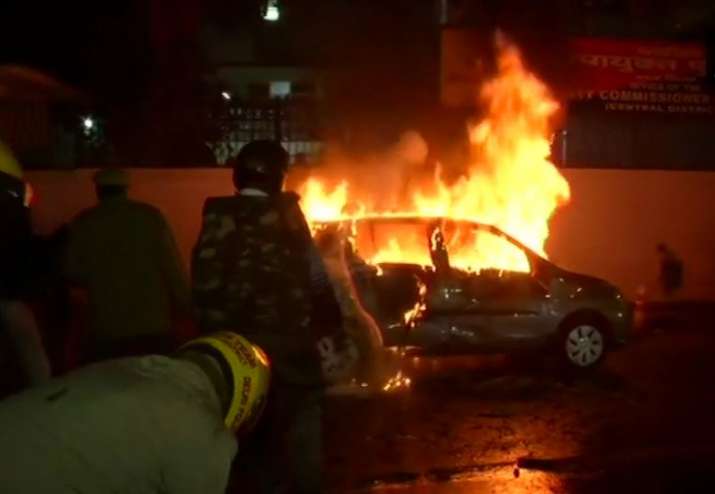 6: 12 pm: After a huge crowd had gathered at Daryganj in Delhi, Delhi Police has resorted to using water canons to disperse the protesting crowd. 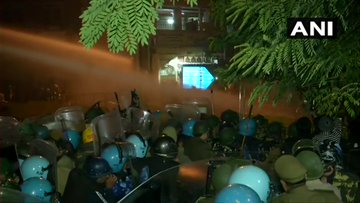 6: 00 pm: Protesters in large numbers had gathered in areas around Seelampur flyover and Loha Pul today evening. Protest was peaceful and the current situation is under control. Section 144 is imposed in the area, says VP Surya, DCP Northeast zone, Delhi.

2: 15 pm: Carrying tricolour and 'Save Constitution' banners, thousands of people rallied in the national capital to continue their stir against the amended citizenship law, even as security forces were put on high alert in various states after at least three deaths during Thursday's nationwide protests.

Bhim Army chief Chandrashekhar Azad was on Friday detained near Daryaganj during a protest march from Jama Masjid to Jantar Mantar, the outfit claimed. According to Bhim Army, the police tried to detain Azad at Jama Masjid but he managed to get away. However, he was detained later near Daryaganj, it said.

1: 30 pm: The police have blocked the exit route of Jama Masjid as Chandrashekhar Azad leads the rally towards Jantar Mantar. The Police is also using drones to monitor the situation at Jama Masjid as a large number of people have gathered at the sensitive Old Delhi area.