Day Two of public hearings in the House impeachment inquiry of President Donald Trump featured a career diplomat with a soft voice and a powerful story.

Day Two of public hearings in the House impeachment inquiry of President Donald Trump featured a career diplomat with a soft voice and a powerful story.

Marie Yovanovitch said she felt threatened by the president as she detailed the story of being abruptly recalled from her post as U.S. ambassador to Ukraine. Then the president attacked her with a tweet, which she said was intimidating.

Some key takeaways from Yovanovitch’s testimony:

This was no staid, bureaucratic tale told by a distant and removed narrator.

Yovanovitch’s account was, instead, deeply personal, layered with outrage over having been “kneecapped” by lies and her abrupt recall in a 1 a.m. phone call from a country she said was vital to U.S. interests.

After a “smear campaign” she said involved Trump’s personal lawyer, Rudy Giuliani, and was amplified by cable news hosts and the president’s oldest son, Donald Jr., she was directed in April 2019 to come from Ukraine to the United States on the next plane because she no longer had the confidence of the president.

“I remain disappointed that the (State) Department’s leadership and others have declined to acknowledge that the attacks against me and others are dangerously wrong,” Yovanovitch said.

She counted herself among the professional public servants who she said serve U.S. interests regardless of who occupies the White House, and, wrapping her testimony in historical context, invoked the diplomats who were killed in the 2012 Benghazi attacks, tortured in captivity in Iran and injured in mysterious attacks in Cuba.

“We honor these individuals. They represent each one of you here — and every American. These courageous individuals were attacked because they symbolized America,” she said.

While Republicans said Yovanovitch was in effect peripheral to the impeachment inquiry, she drew direct connections to the president.

Yovanovitch left no doubt that she interpreted some of the Trump’s cryptic comments about her — “she’s going to go through some things,” among them — in the most chilling way.

“It didn’t sound good,” she said. “It sounded like a threat.”

She said the effect of the president’s comments — including a disparaging tweet as the hearing got underway — “is very intimidating” not just for her but for others who might be similarly inclined root out corruption.

Rep. Adam Schiff, the Democratic chairman of the House intelligence committee, read Trump’s tweet to Yovanovitch and suggested it was part of a campaign of “witness intimidation.”

“Well, I want to let you know, Ambassador, that some of us here take witness intimidation very, very seriously.”

Trump, asked about it later, said, “I have the right to speak. I have freedom of speech.” 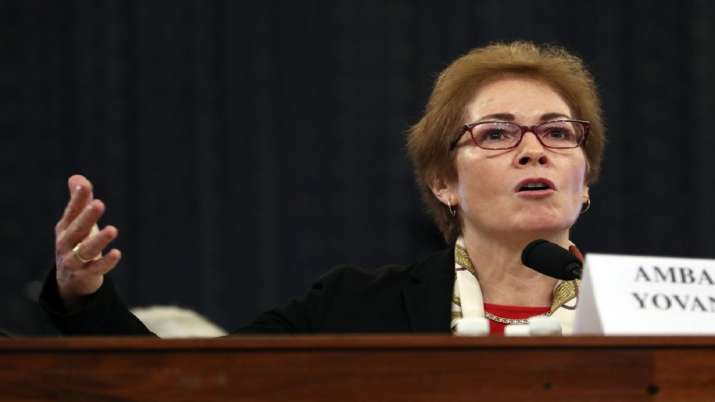 As members of the House questioned Yovanovitch, Republicans were working to highlight another woman in the room: GOP Rep. Elise Stefanik of New York.

Conservative outlets seized on a moment in which Schiff refused to allow Republican Rep. Devin Nunes, the top Republican on the House intelligence committee, to yield his time to Stefanik early in the hearing. But the attempt came during a portion of the hearing when rules explicitly stated that only Schiff, Nunes and committee lawyers were permitted to question Yovanovitch.

When Stefanik’s allotted time did come up, she used it in part to criticize Schiff and read news clips recounting his promise that the whistleblower would be allowed to testify before the committee. Republicans, led by Trump, celebrated Stefanik, the only Republican woman on the committee. Trump retweeted multiple clips of Stefanik asking questions of Yovanovitch. 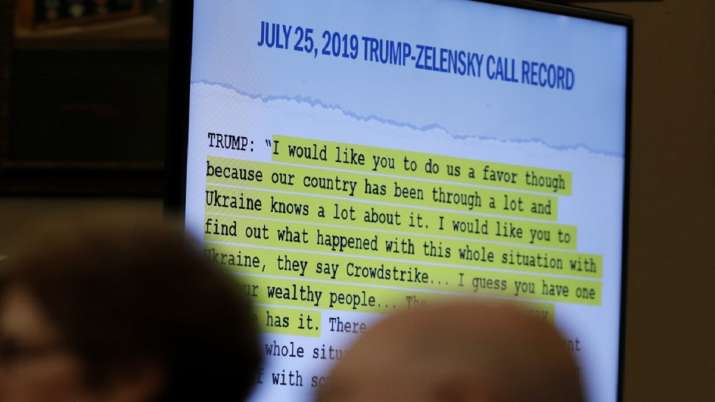 He would be too busy to watch, said the White House.

He’d tune into an opening statement delivered by Nunes but spend the rest of the day “working hard for the American people,” press secretary Stephanie Grisham said.

Instead, Trump responded to the hearing in real time, castigating Yovanovitch by tweet as she testified about her poor treatment by the president and his administration.

“Everywhere Marie Yovanovitch went turned bad,” tweeted Trump, pointing to the time she spent in war-torn Somalia and in Ukraine, where Trump said “the new Ukrainian President spoke unfavorably about her.”

He also defended his decision to pull her from her post, arguing the U.S. president has an “absolute right to appoint ambassadors” who serve “at the pleasure of the President.”

‘THANK YOU FOR YOUR SERVICE’ 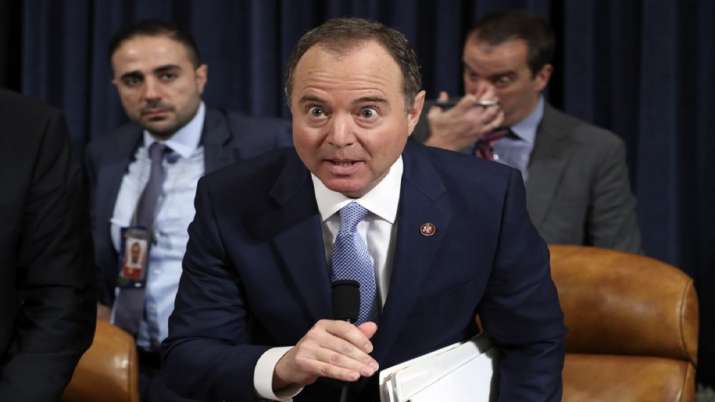 They thanked her for her “tremendous” public service. They said Georgetown University was lucky to have her. One even seemed to suggest she shouldn’t have to spend her day with them in the first place.

During hours of questioning, Republicans went out of their way to avoid impugning Yovanovitch’s character and mostly steered clear of challenging her decades-long career in diplomacy.

Rep. Brad Wenstrup appeared to commiserate with her exit from Ukraine by saying that, as an Army reserve surgeon summoned one 2005 afternoon to Iraq, “I understand that shocking feeling that can come with some abrupt change like that.”

The points Republicans did look to score generally centered on several themes: getting her to concede that a president can indeed have the ambassador that he chooses — a fact she acknowledged even while adding, “What I do wonder is why it was necessary to smear my reputation.”

And they sought to highlight the key events and discussions central to the impeachment inquiry that she was not part of.

Were you involved, Nunes asked at one point, in the July 25 phone call between Trump and Ukraine president Volodymyr Zelenskiy or in the preparations for it? Yovanovitch replied she wasn’t.

How about, he asked, the deliberations over the “pause” in military aid to Ukraine as the U.S. reviewed the new president’s “commitment to corruption reforms”? Was she involved in that?

“For the delay?” she asked.

“For the pause,” Nunes pointedly replied.

“No,” Yovanovitch conceded, “I was not.”

Also Read: I have the right to speak, the freedom of speech: Trump

Also Read: Impeachment proceedings a 'sham and should not be allowed': Trump