In her memoirs, Maria Sharapova wrote 100 times about Serena Williams commenting about her 'thicks arms and legs'

New mother Serena Williams pens an emotional open letter to her mother, Oracene Price, explaining her experience of becoming a mother to Alexis Olympia. The pro tennis star wrote a heartfelt note to her mother, thanking her for her support and the way she taught her to be strong in a world where people are ignorant and hostile towards a ‘black woman’. In the letter, Serena compliments her mother as the strongest woman she knows.

Respect my privacy as I'm trying to have a baby: Serena Williams slams John McEnroe

Pregnancy has given me a 'new power', says Serena Williams

In another part of the letter, it seems like Serena Williams is giving a enveloped response to Sharapova’s description about her in her book, which released o 12th September this year. She wrote:

I’ve been called a man because I appeared outwardly strong. It has been said that that I use drugs (No, I have always had far too much integrity to behave dishonestly in order to gain an advantage). It has been said I don’t belong in Women’s sports — that I belong in Men’s — because I look stronger than many other women do. (No, I just work hard and I was born with this badass body and proud of it).

Though the letter is written to her mother, the language she uses to describe herself is similar to what Sharapova used in her memoir. Sharapova wrote:

First of all, her physical presence is much stronger and bigger than you realize watching TV. … She has thick arms and thick legs and is so intimidating and strong. And tall, really tall.

Sharapova even described Serena Williams as a ‘colossal figure’, despite the fact that she herself is 5 inches taller than Willaims! In the passages about her matches with Williams, Sharapova even accused that the latter was using meldonium, a drug banned by the World Anti-Doping Agency, during all the matches she lost to Williams after 2004.

Serena Williams didn’t speak about the book to the press. But her letter to her mother speaks volumes without pointing fingers directly at Maria Sharapova. 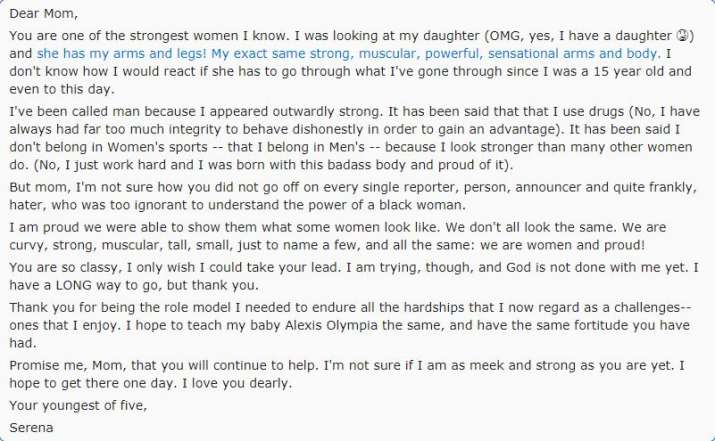 After redirecting her words towards Maria Sharapova’s memoirs, she gets back to praising her mother.

'You are so classy, I only wish I could take your lead. I am trying, though, and God is not done with me yet. I have a LONG way to go, but thank you.

Thank you for being the role model I needed to endure all the hardships that I now regard as a challenges--ones that I enjoy.'

She signs off the letter as ‘your youngest of five’ explaining her place in her sibling lineup.

Serena Williams gave birth to a baby girl two weeks ago on September 1. On Friday, she shared a picture of her newborn in a classic onesie that reads ‘Smart and Strong like my mom’. She also revealed that the family had to spend six days in the hospital after her arrival because of complications.

The daughter is named after her father and Reddit co-founder Alexis Ohanian.