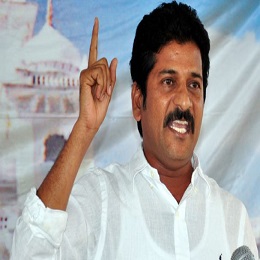 Anmula Revanth Reddy (born November 8, 1969) is a politician from Indian National Congress. He was a member of ABVP while he was a student. He got married in 1992 at an early age of 24. Later he started his political career with TDP in 2004. He was elected Member of Legislative Council MLC as an independent candidate in 2008 . Later he met TDP chief N. Chandrababu Naidu and joined the Telugu Desam Party. In 2009 he was elected to the Andhra Pradesh assembly from Kodangal Constituency with 46.45% Votes. He declared his assets in election affidavit as 3.6 crores with 73 lakhs liabilities.During his first term of office he commenced the construction of Kosigi bus depot and also a polytechnic college. He once again contested in 2014 general elections and elected to the Telangana assembly from Kodangal Constituency with a majority of 14,614 votes. He declared his assets in 2014 elections as 13.12 crores with 3.3 crores liabilites. He was elected as Floor leader of Telugu Desam Party in Telangana Legislative Assembly. On 25 October 2017, the TDP announced that it was removing Reddy as the leader of the Telengana TDP after reports surfaced that Reddy would consider joining the Indian National Congress. On September 20, 2018 he was appointed as one of the three working presidents of Telangana Pradesh Congress Committee.