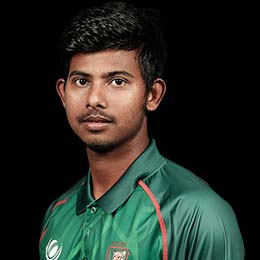 A talented young batting all-rounder who is quite a 'thinking' player. He has been praised by many for his beautiful strokeplay. After a horrid debut first-class season, Mosaddek came back stronger the following year, struck two centuries and converted them into doubles in 2015 and hence became the only Bangladesh player to hammer three doubles tons in first-class cricket. He averages 65 with the bat and has scored over 2500 runs. His gifted abilities saw him earn a Test cap against India in a one-off Test. He can surely be a player for Bangladesh in the upcoming years to take on the responsibilities with the bat.